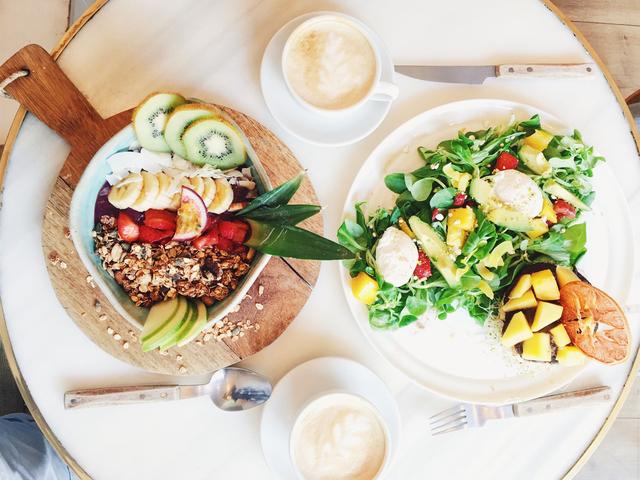 It's pretty easy to tell if you're a morning person: Is the only thing getting you into bed at night the promise of breakfast the next morning? Do you love the word "brunch" so much that you use it as a verb whenever possible? Have you ever in your life met a mimosa that you didn't like? If you said yes to any of these pressing questions, you're really into breakfast. But let's say that with a little age and experience, you're less into Cheerios, bacon, and eggs and more interested in hearing about plant-based options. Check out these sweet, savory, and satisfying vegan recipes that are sure to make you rise and shine. 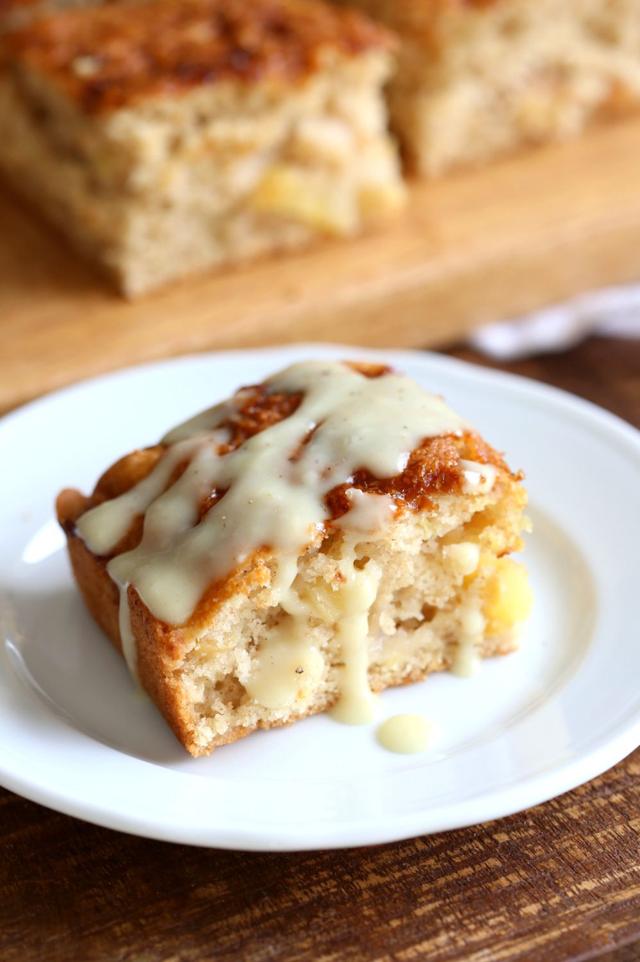 Who doesn't love cake for breakfast? When regular coffee cake won't do, try this vegan, gluten-free cake. It's lightly sweetened and loaded with chopped apple.

Get the recipe at Vegan Richa. 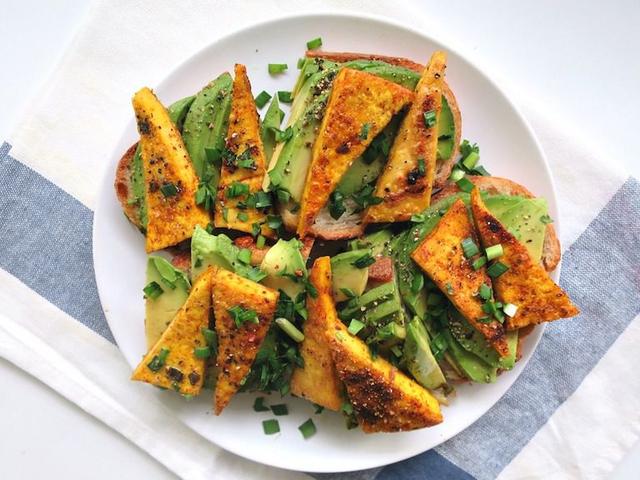 Eat up the avocado-toast trend with this delicious take that incorporates tofu, turmeric, and chives.

Get the recipe at Radiant Rachels. 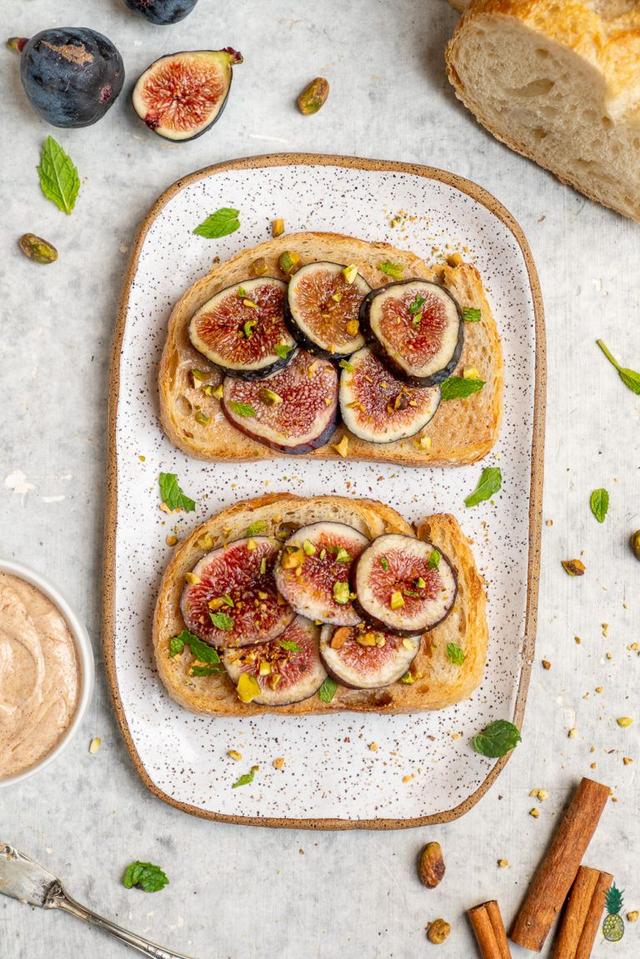 Top your toast with a plant-based butter spread spiced with cinnamon, vanilla, cardamon, and a mix of sliced figs, pistachios, and fresh mint.

Get the recipe at Sweet Simple Vegan. 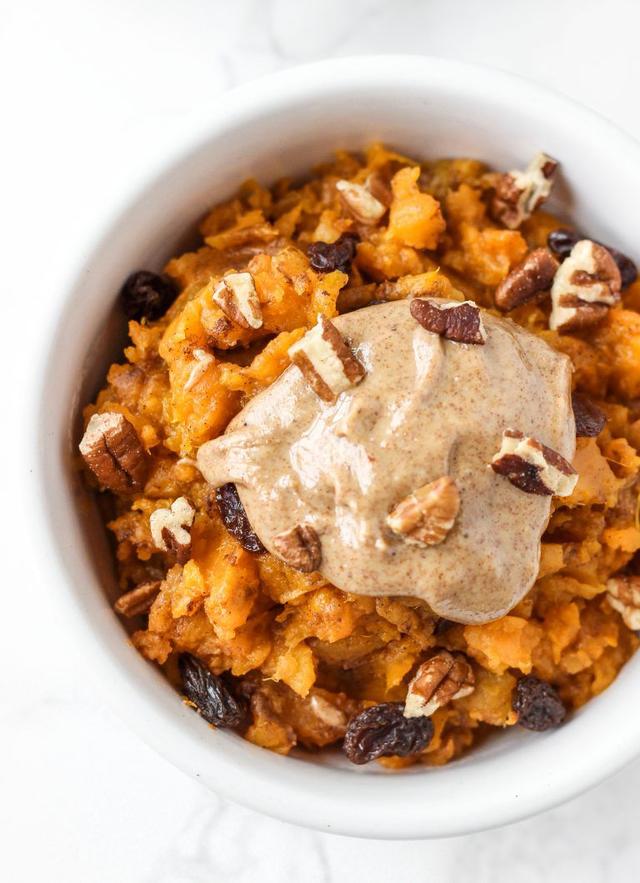 When you're not feeling oatmeal for breakfast, replace it with a tasty mix of roasted and mashed sweet potatoes, nuts, raisins, and almond butter.

Get the recipe at Healthy Liv. 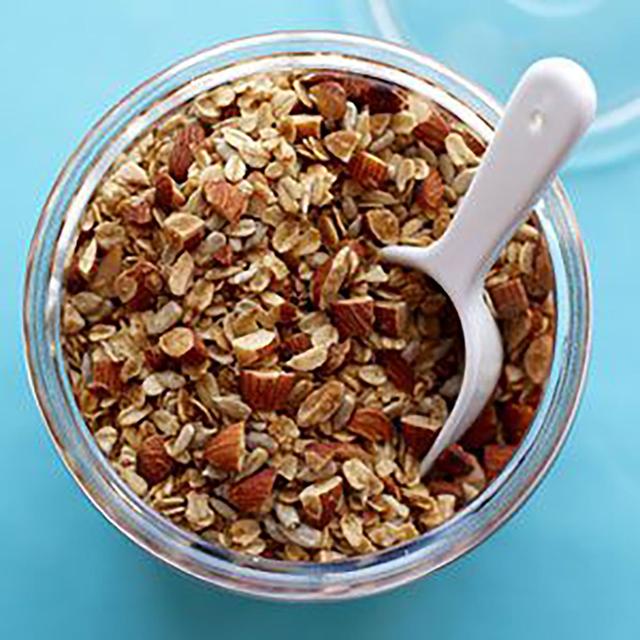 Fuel up for whatever the day brings with a morning meal of homemade granola paired with nut milk and topped with sliced fruit. 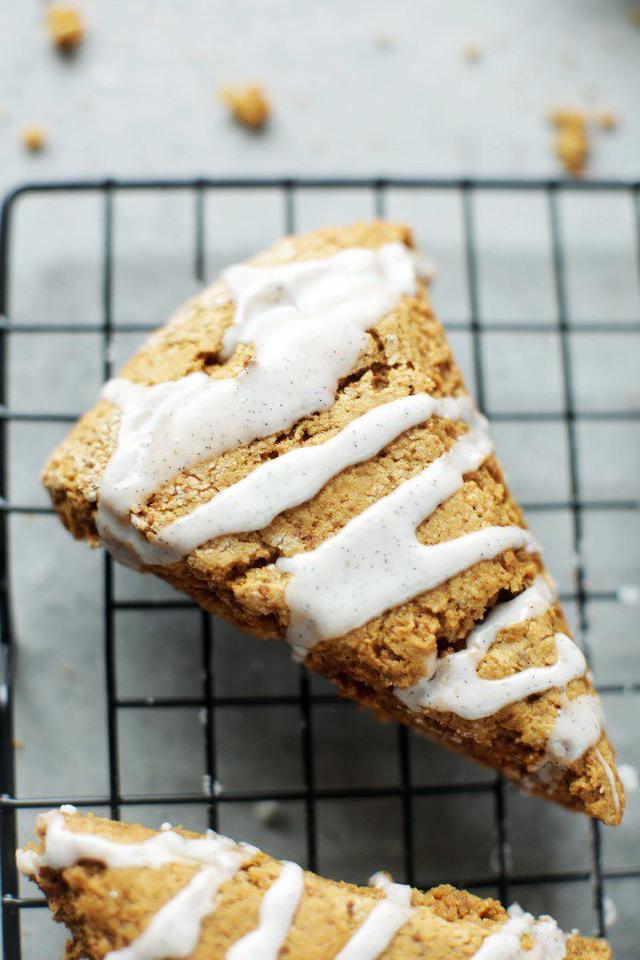 When you want a sweet morning treat, try these flavorful scones, bound with a flax egg (just simple flax seed meal and water!), spiced with ginger, cinnamon, and cloves, then drizzled with an almond milk glaze.

Get the recipe at Nutritional Foodie. 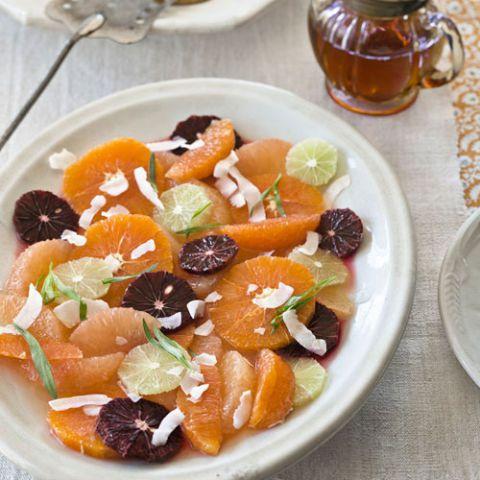 This refreshing sweet-and-tart fruit salad is delicious on its own or served over oatmeal or vegan yogurt. And if you're whipping it up in the summer, substitute summer berries and stone fruit for the citrus. 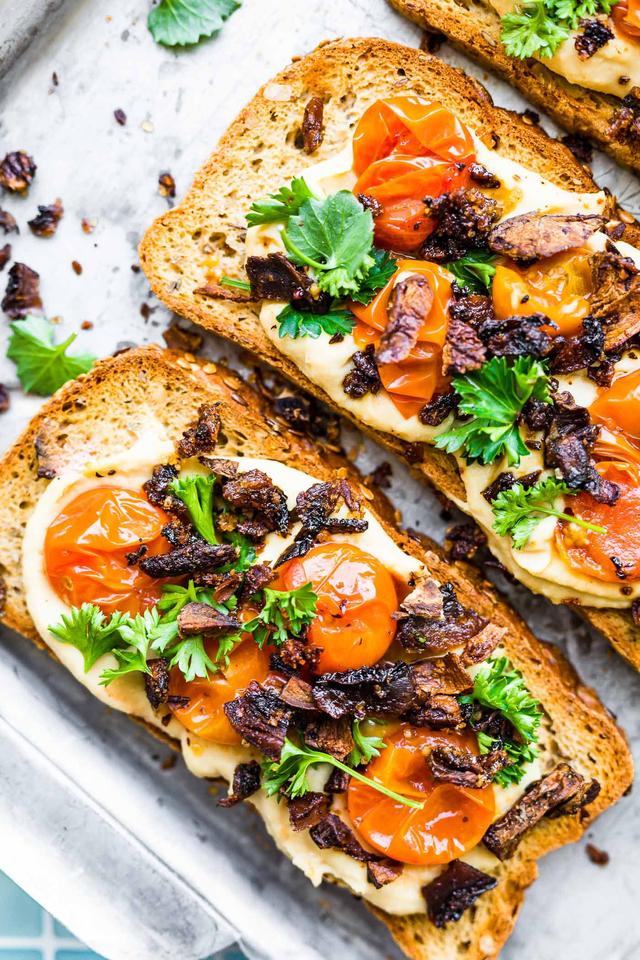 Looking to wake up with a burst of protein and fiber? Try this umami-flavored spread of oven-roasted mushrooms, warm cherry tomatoes, and creamy hummus on your toast.

Get the recipe at Cotter Crunch. 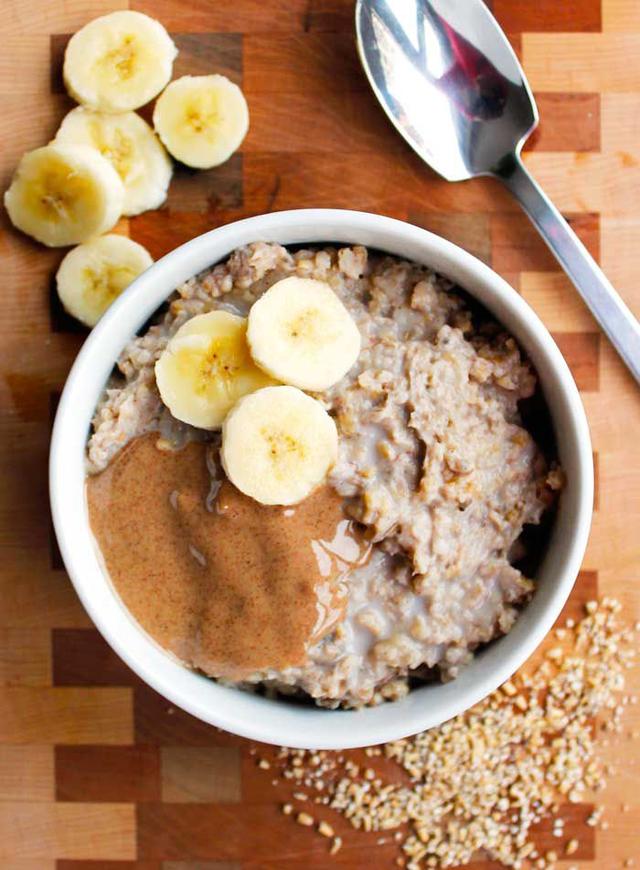 Devote your slow cooker to overnight duty, and you'll have a warm, filling, and delicious steel-cut oatmeal blend ready and waiting when you wake up in the morning.

Get the recipe at Smile Sandwich. 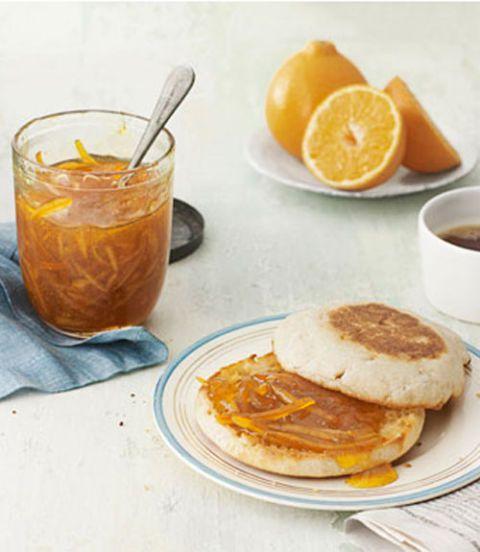 In a mere 30 minutes, you can whip up this fruity marmalade and have it on hand for breakfast all week. Our recommendation: Serve it on toast or an English Muffin with a smear of peanut butter or vegan cream cheese. 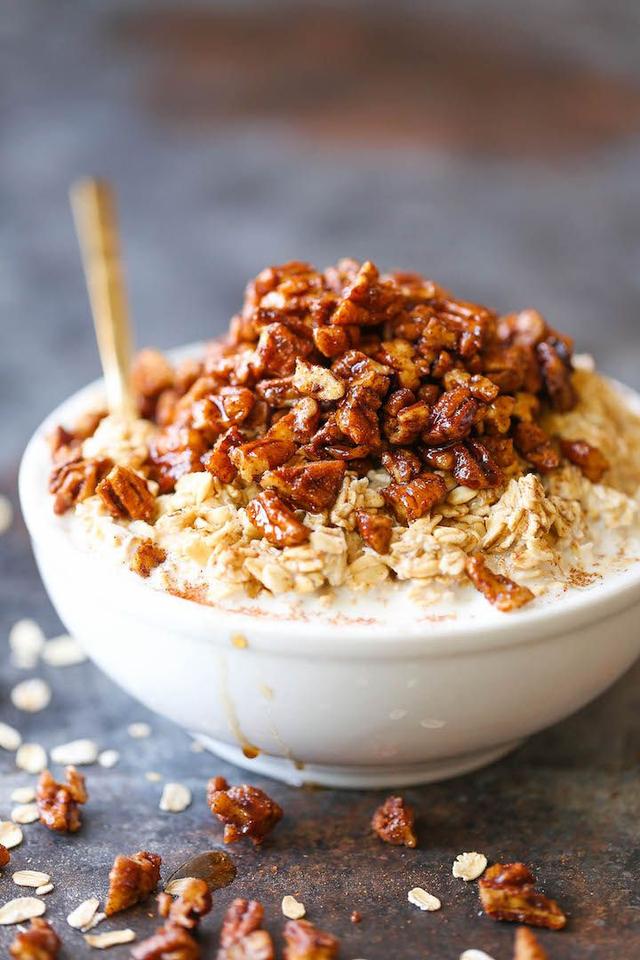 Enjoy the sweetness of pecan pie without all the guilt thanks to a bowl of easy overnight oats topped with a generous helping of sweetened chopped pecans. 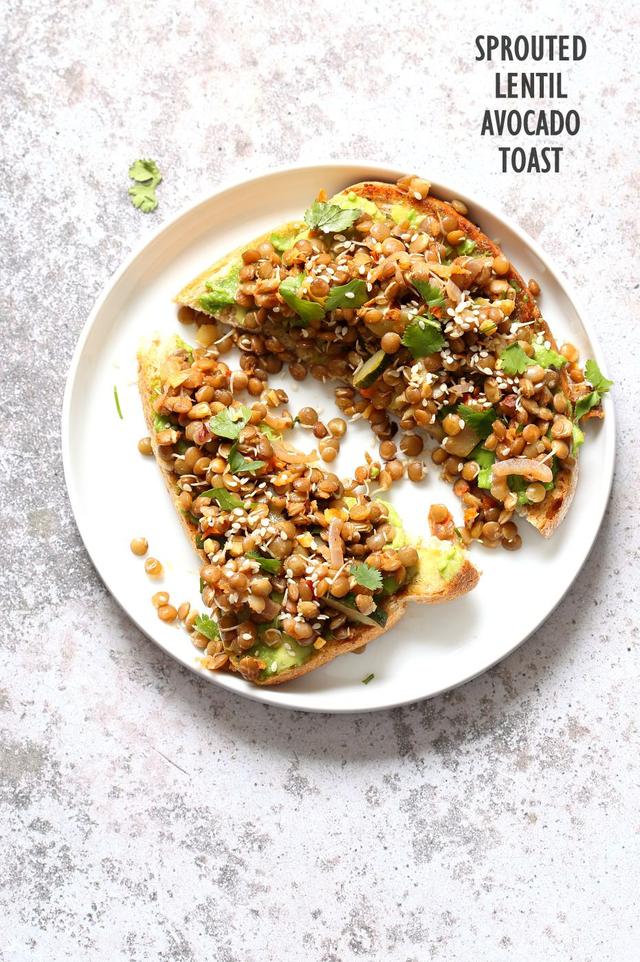 You'll be the picture of health after eating sprouted lentils sauteed with aromatics, ginger, and spices on top of mashed avocado toast.

Get the recipe at Vegan Richa. 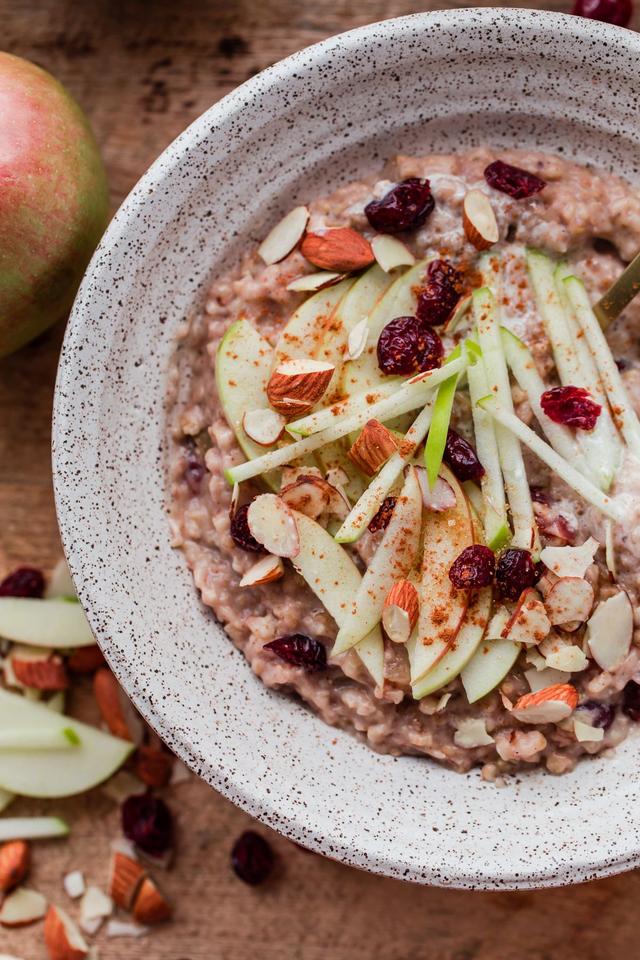 Whether you're going to run a marathon or just have an action-packed day, this breakfast of spiced oatmeal loaded with fruit (both cooked and uncooked) and spices will have you winning the day.

Get the recipe at A Beautiful Plate. 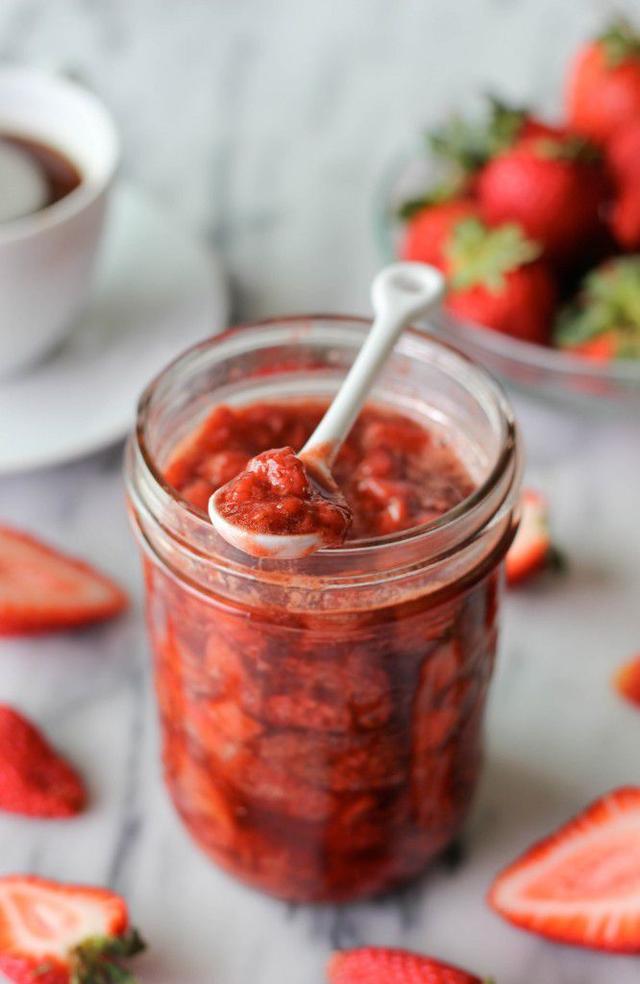 So long, sad plain toast. This low-sugar strawberry jam will add a much-needed kick to the bread. For a little something extra, top with fresh sliced strawberries. 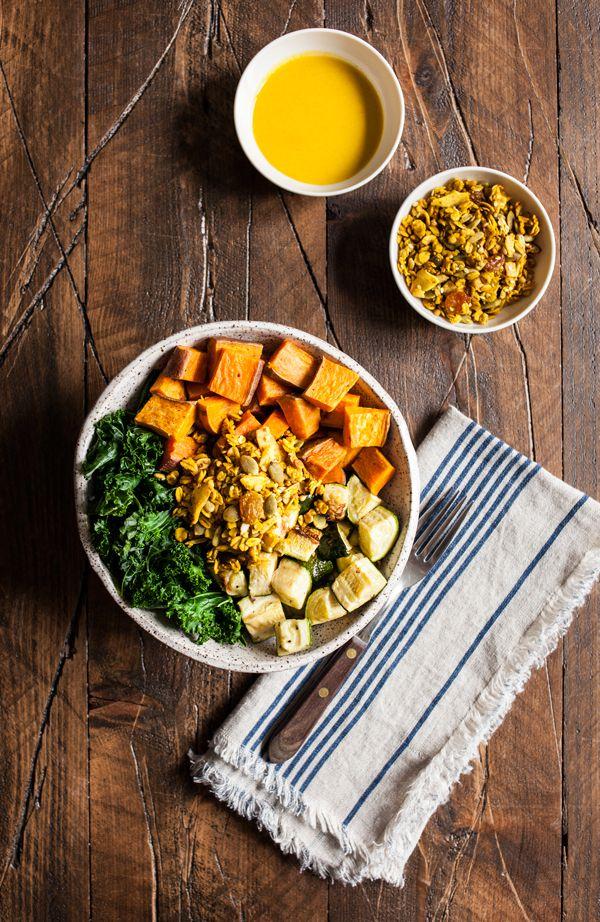 If you were the kid who never had to be told to eat her vegetables, have we got the breakfast for you! Roasted sweet potatoes and zucchini are served alongside steamed kale, topped with a crunchy spiced granola and tahini dressing. 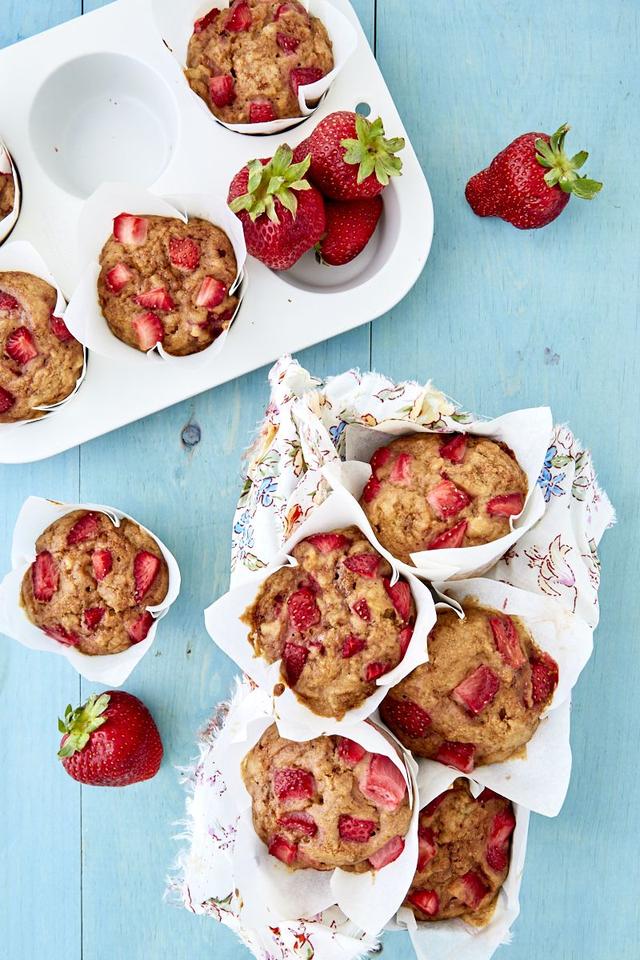 Whip up a batch of these gluten-free, vegan, strawberry-and-banana muffins on Sunday night and have ready-made breakfasts (and snacks) for the week ahead.

Get the recipe at Keepin' It Kind. 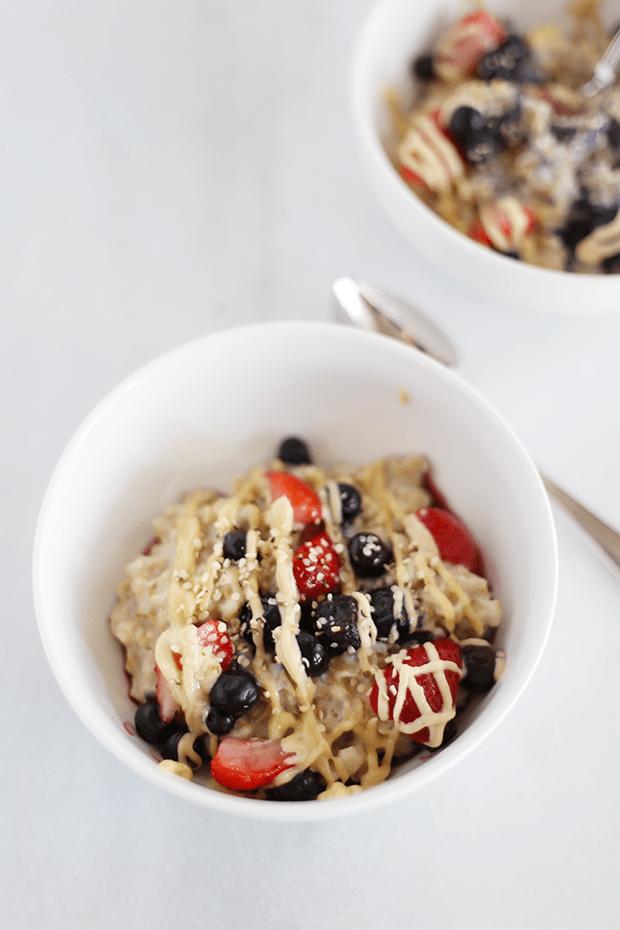 Combine sweet and savory in a tasty dish that combines high-fiber rolled oats with fruit, a drizzle of tahini and maple syrup, and a smattering of hemp seeds.

Get the recipe at Two Raspberries. 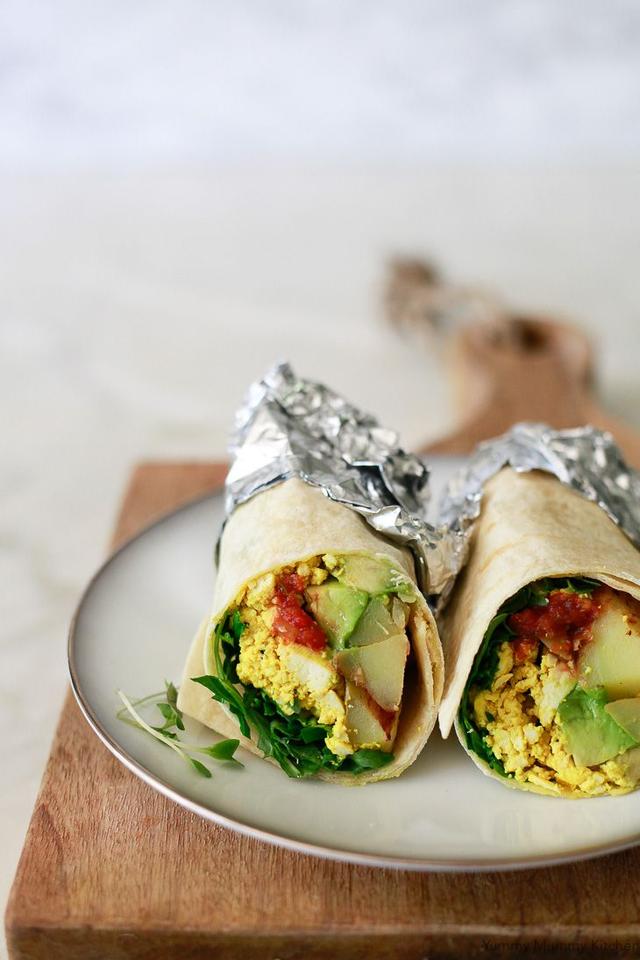 There's no better breakfast on-the-go than a burrito. Keep your tortilla treat on the healthy side with a filling of tofu, potatoes, leafy vegetables, and sliced avocado. 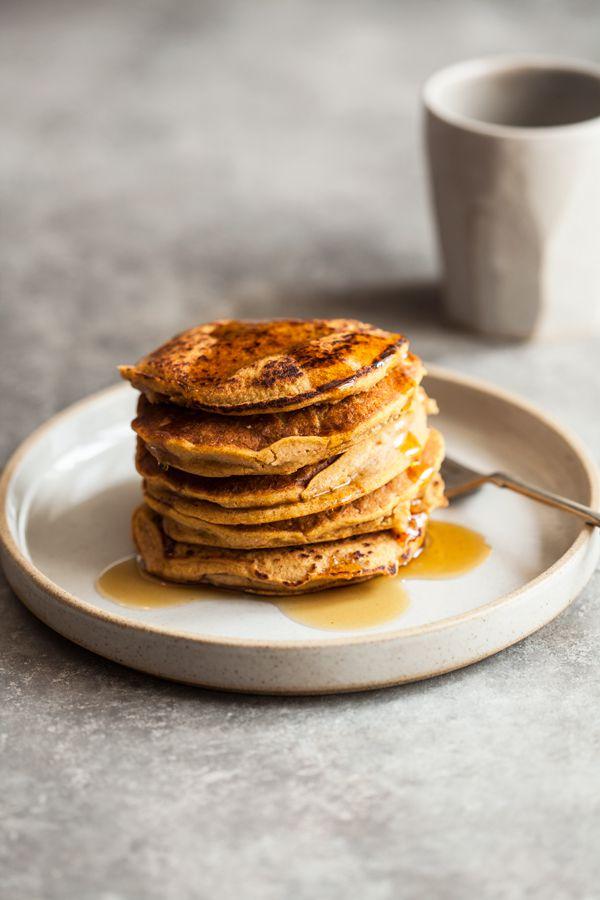 Just try to resist a not-so-short stack of these gluten-free, vegan sweet potato-and-millet pancakes. Serve them with a drizzle of pure maple syrup, a dollop of vegan yogurt, and a sprinkle of toasted chopped nuts.

Get the recipe at The Full Helping. 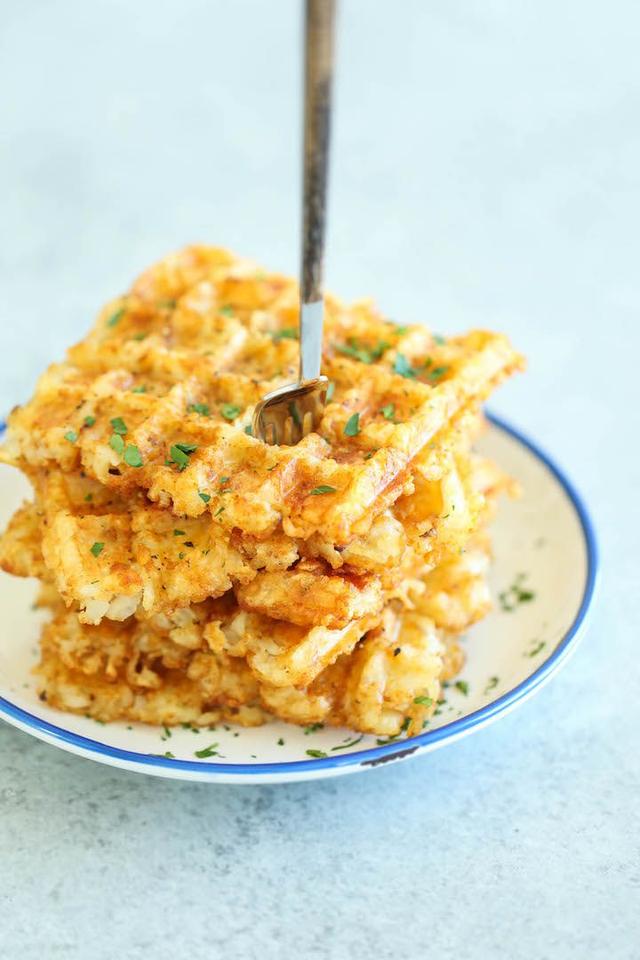 Is there anyone in the world who doesn't like tater tots? To make this fun dish, simply line a waffle iron with tater tots, and voilà! A vegan breakfast the whole family will love. Serve with tomato jam and vegan sour cream. 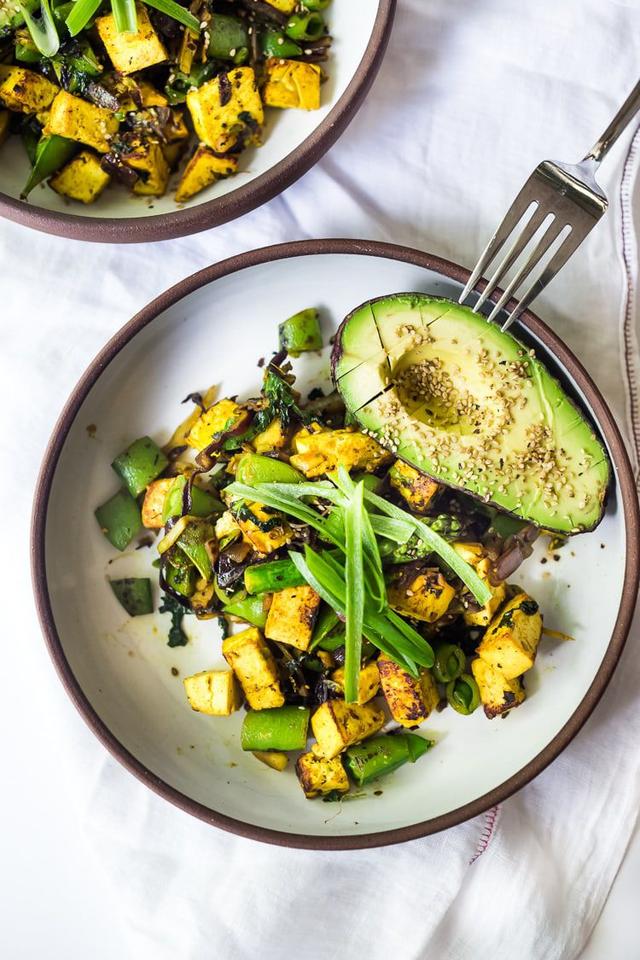 A mix of vegetables (think asparagus, snap peas, celery, and cabbage) and firm tofu get seasoned with soy sauce in this savory breakfast dish.

Get the recipe at Feasting at Home. 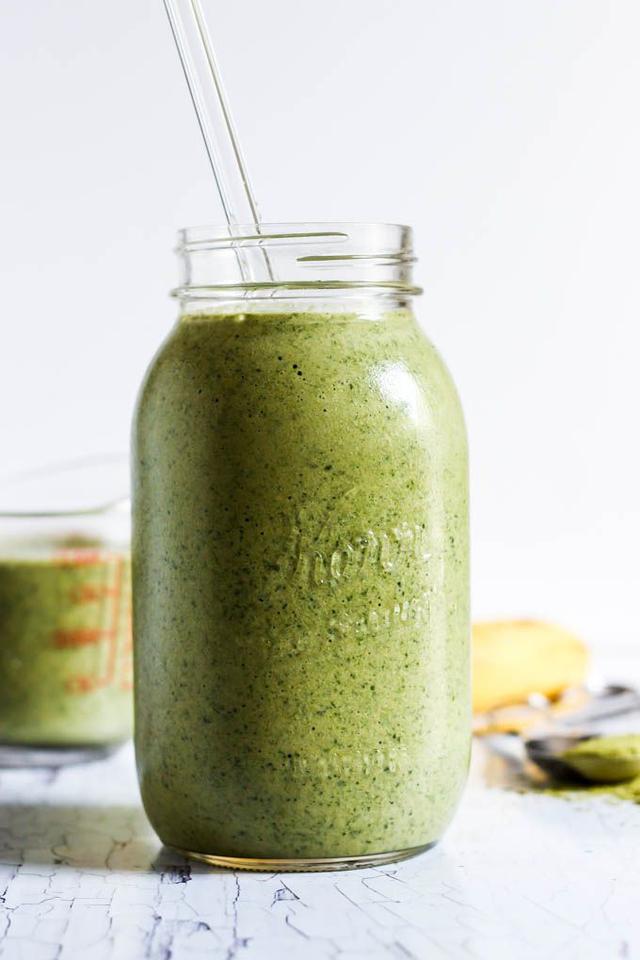 You can enjoy this super-healthy, veggie-packed (spinach and zucchini!), protein-rich rich smoothie at your desk or on the go!

Get the recipe at Emilie Eats.