This is One Of My Favorite Albums Period! Mars iLL – Raw Material Album Review #throwbackthursday 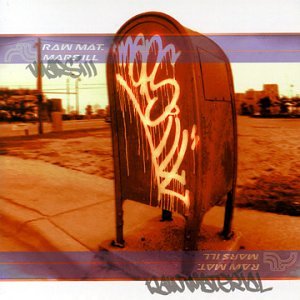 Mars Ill’s release Raw Material is one of the best albums ever made, and it is easily a classic, especially featuring tracks such as “Sphere Of Hip Hop pt 2”, “Black Market”, “Loves Not”, “Rap Fans”, “Touch And Go”, and “Sphere Of Hip Hop (original)”, and more. All material from beginning to end contribute to this albums elite status. Mars Ill has put together a great album for fans, giving fans what they want. The intro track entitled “Mars Ill” is fashioned in such a creative fashion, that the dialog, and music combine to forge the perfect introduction for an album… “We looped the intro track alone, for a whole day, before we even broke into the albums sack of goodies.””

The first concept that enters many minds of today in regards to Christian hip hop music is….drum roll…… “wack”. Magnificently talented artists such as Braille, Tunnel Rats, and Mars Ill cleanse this concept from fans on a regular basis. Its safe to assume that a large majority of fans may not even realize on their first few listens, that the above mentioned artists are Christian hip hop musicians. Mars Ill creates great hip hop music fans can easily appreciate, and enjoy, and they do not plague the concepts presented through their music by use of extreme-religiously fanatic statements. For example, “Love’s Not” is a classic cut, conveying the concept of what love is not, by presenting an assortment of examples of actions that do not show love. One of the best conceptual tracks put together, a positive rhyme reflecting good Christian values that easily relates to the rest of the planetary population, and from first listening, the only mind grasping concept is….drum roll…..”damn that was raw material.” Mars Ill simply put, are 110% hip hop artists, who have an abundance of skills, and simply happen to have faith in Jesus the Christ.

Mars Ill’s music is designed for those heads who are over-entertained, and under-challenged; however, make no mistakes Mars Ill’s music is highly entertaining. Raw Material leads off with a self-titled tack ( wouldn’t it be more cool if it was a Celph Titled produced track – hint for future recordings ) obviously entitled “Mars Ill”. The content of this recording is very creative, and interesting. Answering machine messages from artists such as Chief XL, and Gift Of Gab ( Blackalicious ), amongst a variety of other “super-talents” mesh well within this track, as they are nicely integrated into the cut, leading up to a banging switch up where the beat hits fans hard with purely fresh vibes that you could countlessly play-back with over delight. One of the best beats these ears have been blessed with, no question. Fans need to speak up as the group asks: “Hip Hop’s dope from the inside, how’s it look from where your standing”.

On an album as good as this, its hard to select one “spotlight” track over another; however, the tightest joint on this album is “Love’s Not”. All other cuts run a very close second; therefore, it’d be pointless to single out, and mention other notable tracks. Love’s Not is an outstanding conceptual track which features outstanding vocals, and production. Hands down. The creativity behind the creation of this track is enlightening. “I know what love is, and it just don’t stop/ but I can explain it better when I say what love’s not.” – very interesting approach. “Love is not abortion” and “Love is God Divine, crucified for mankind”. ManCHILD, Mars Ill. Another great track we want to single out is “Rap Fans”, as this is an exceptionally put together track, simply put together for the fans. Making reference to all elements of hip hop, this cut is very refreshing, and easily enjoyed. A truly classic cut, on a truly classic album.

It hurts me to say this. And When I say it, you are going to say, "Duh we already knew that homie lol". CD's are pretty much dead. And You know what, so are complete albums. Now we are in the age of streaming and…