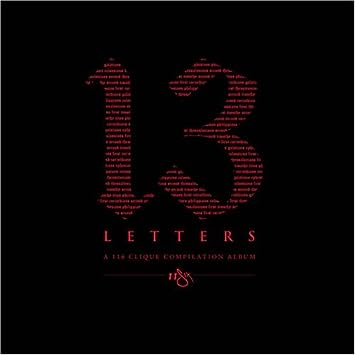 Reach Records and the 116 Clique always seem to be putting in work. They’ve put out a handful of solo releases and two versions of their 116 Clique Compilation album within the past year. Now the crew is back at it again with a new 116 Clique album, this time bringing in their 1-1-Six family from all across the United States. The purpose this time around is to give the listener an overview of the writings of the Apostle Paul that are found in the Bible with an album appropriately titled 13 Letters. You see, we have 13 Letters written by Paul in the New Testament, thus the albums name, as each book is summarized in the form of a hip-hop song.

When I first got my hands on this album, I wasn’t sure what to expect. I knew for a fact that I was going to be listening to some quality hip-hop music, but other than that I didn’t know what I was going to be hit with. Was the project going to be really deep and meaty? Was it going to be all dirty south and Midwest style? Who were the emcees and producers putting in work? Lots of questions, but they are all easy enough to answer. The answer to the first I’ll save for later. In terms of the style of the album, it’s a pretty diverse project; you’ve got crunk Midwest beats, east coast bangers, bouncy tracks that get you moving, and even some of those laid back R&P type beats that are great for worship. Emcees who appear on the album would include Lecrae, Tedashii, Trip Lee, shai linne, 1-Lyfe, Sho, Dillon Chase, Flame, and Json; while producers include: Tony Stone, Numinus, and NAB.

So let’s talk about the music. As I already stated, each of the tracks on the album (13 in all) deal with one of Paul’s letters and serves as a lyrical summary of the content that is contained within the writing. On the surface, this sounds like it would make for a rather dry album, but the 116 Clique did a wonderful job of bringing the same kind of creativity that they always have in order to deliver their message. An example of this would include Lecrae’s “Break It Down,” where he speaks of the Corinthian church as a single person who is having all kinds of different issues, and later reveals that “Cory” isn’t just a person, but a group of believers who were doing these things. Another unforgettable track is Sho’s “Justified” (Galatians), which is a very bouncy track that speaks about being justified in Christ while hitting you with a very catchy hook that keeps you chanting “bear some fruit!” Even shai linne’s east coast laden “Gospel Music” is nice as you’ll never hear a clearer breakdown of the book of Romans, and that makes you want to keep the track on repeat. One of the pluses for this album is the number of emcees that appear on this project; each brings a unique style of rhyming, which lends itself well to this kind of project. Even for those emcees who appear on multiple tracks, they do a great job of making sure to use drastically different styles on their songs.