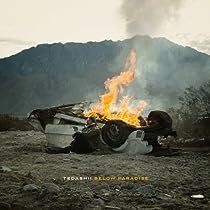 It does not matter if its writing, music, painting or other art forms, I believe great art comes from the artist taking his life experiences and putting  it into his work. What he is going through or has gone though becomes apart of his art. The problem is, Christian artist ( really anyone in ministry) are afraid to put their dirt out there like that because they don’t want to be judged. Sometimes we Christians hide how we really feel when we are going through things because we don't want it to seem like our faith is weak. Some artist display this unrealistic image of of this perfect super Christian. I love it when an emcee is transparent and puts himself and his emotion into his music. That’s what Tedashii is giving us with his fourth studio album. On May 27, 2014 Tedashii dropped Below Paradise, which  deals with the pain he suffered after the death of his young son in a car crash. Over the past  two years Tedashii has been dealing with the death of his son, the hardship it placed on his marriage, and how Yah has been there with him to comfort him the whole time.

Tedashii stated in a press release that...

In March 2013 I had the worst day of my life. The loss of my son changed me forever. I experienced grief and sorrow to the depth of my soul. The veil was lifted, the smoke cleared and all I had was pain... ...The reality of being a Christian and suffering so harsh a thing was hard for me to grasp. This album is my journal shared publicly with everyone during this difficult journey as I worked to understand all I felt, experienced and believed. I am human, I am hurt, I am His. By His grace I am what I am. I pray this will be an album that all can feel, even if you can't relate, and be moved to true emotions about the reality of life in a harsh world with a loving God, below paradise.( "Below Paradise". Cross Rhythms. May 6, 2014. Retrieved May 30, 2014.)

This project takes us  into the mind of a Christian man while he goes through  life, suffering, pain, and the unrealistic expectations people. In an interview with Reel Gospel, Tedashii said that the project deals with more than suffering.

"We live in a fallen world with a loving God... Both are true, and to ignore one and only receive the other you dismiss how great a love God has for us... I felt forsaken, alone, and in a place of darkness that has been kept masked by a focus on only the good side of this life."

"I look to Paul, his example of the thorn in his flesh... he was shipwrecked, he was lost at sea, he was imprisoned, he was starved, on and on down the list you go..." he continued. "And then I look at Jesus and I look at all that He suffered and I look at a number of people who've gone through suffering and Biblically their suffering worked to the good of God's glory...I kinda ran with the album the way I did topically because I was just convinced that this will work together for the good to those that love Him."

Tedashii said what he has gone though has had an impact on how he wrote on this album. On other projects, if he had the beats beforehand then he would let the tone speak to him and tell him what to say. But, if he did not have the beats then he would have a producer to create the music based on what he had in mind. He says...

"With this album though, things were very different. I approached every song with the same attitude of bearing my soul. Bearing my soul was the only thing that mattered and who I was speaking to, varied depending on my mood more than the music." Adding, "For every track on this album, I spoke to every person I could think of."

On the title track "Below Paradise" the strings remind me a of "The Hip Hop Violinist," Miri Ben-Ari. (Study your history, this woman is ill) The production is clear, crisp and sharp. Like any true introduction, this track gives you the main idea of the work of art you are about to get into. He opens with

" Look around I seen paradise disappear, It's a mirage to the people who's still living here, Make no mistake, life is great but it's still lacking, Sister gone, son  gone, can't deny what happened."

He also talks about how Christians have real issues and real problems. We expect A game production when it comes Reach Records and  producers like Dirty Rice and Gawvi (Rhema Soul, Social Club) deliver, but the package is a whole lot more commercial then we are used to hearing from Tedashii. When you listen to this project, you can really feel the emotion and the pain. It's written and produced so that it really delivers to your heart without being too dark.

The featured artist on BP roll pretty deep so you would expect it to sound more like a compilation album but that is not the case. The spotlight never comes off of T. Dot because most of the features are locked down to the Chorus. Artist like Britt Nicole, Tauren Wells, Crowder, and Tim Halperin help add the CCM/Pop seasoning that you hear throughout the project. My favorite  features come from 116 crew members Lecrae, Andy Mineo, and Trip Lee (KB and Derek Minor are on the deluxe version), along with SPZRKT and Christon Gray. I'm pretty sure "Nothing I Can't Do" featuring Trip Lee and Lecrae is one of those joints hardcore Reach Fans were checking for when they saw the leaked track listing. They might end up being a little disappointed when they find out Trip Lee has been locked down to the Hook, I know I was. Even though the track does not have the punch of other Reach anthomes, the song still bangs. The repetitive hook, along with the beat almost gives it an hypnotic effect. "Catch Me If You Can" is also bittersweet because it features Andy Mineo but not only is on only found on the hook but he's singing. It's a cool song but I was looking forward to hearing some fire from Andy.

When you become a dominant brand, like say Apple for example, You will build a following that will love everything you do. That's the level that Reach is on now. There are certain key Reach fans that will love this project because they love Reach Records as a brand. But there will be longtime T.Dot fans, like myself that will be a little disappointed. In an interview with DJ Wade-O Tedashii said that he wanted to do something a little different with this project, and he did. This album is heavy on the Pop sound and light on the street bangers. Other reviewers have criticized Reach for having too many anthems  on their projects.

There are certain things I look for in an album that I feel are missing in this joint. Certain elements that I feel would make it a classic album. Forgive me for using a secular album, but I will use The Notorious B.I.G’s Life After Death as an example. Biggie took a variety of styles and flavors, mixed them all in a pot and added his own seasoning. He had heat for the dance floor in the form of “Hypnotize,” while “Kick in The Door” was that heat for people that like that street Hip Hop. You had something for everyone but Biggie had the lyrical skill to make it all work. He had a strong supporting cast, but there was not one song that he didn't own and dominate. You had a collection of songs, that were not trendy. They were timeless. If that album dropped today it would still be better than most of the Hip Hop joints coming out today. I like it when albums are well rounded musically, but I prefer my Hip Hop less "Poppy". For the most part, you won't hear many classic bangers like “Dum Dum”, “Make War”, and “Go Hard”.  You will have to be satisfied with “Nothing I Can’t Do”, “My God,” and the bonus tracks “Earthquake” and “On Ten” from the deluxe version. I did like the realness of the album. It's a whole lot more real than most Christian projects because we have seen a real Christian man, going through real issues. When we are going though things we are not always quoting scriptures. And it is that juxtaposition of emotion and aspiration, that makes Tedashii's latest release a decent listen. Tedashii does deliver a quality album that will touch your heart. But if you are looking for a sound that is a little more hardcore, this album is not for you.

5. Catch Me If You Can ft. Andy Mineo

What do you think of Tedashii's latest album?  Please share your thoughts in the comments section!