By BRIAN STELTER AND BILL CARTER 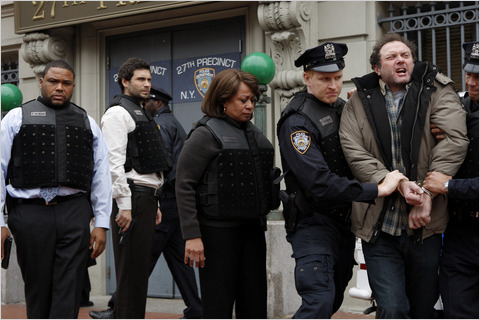 Will Hart/NBCA scene from an episode of “Law & Order” filmed in February.

NBC confirmed Friday that it had canceled the original “Law & Order,” bringing an end to a 20-year-old television drama that jump-started an era of television production in New York City.

“Law & Order” was on the verge of becoming the longest-running drama in prime-time television history, surpassing “Gunsmoke.” But it appears that the “Law & Order” executive producer, D*** Wolf, has settled for a tie. The final episode of the series will be shown on May 24, NBC confirmed in a news release Friday.

Actors and producers on the program were told Thursday that the series had been canceled, but NBC and Mr. Wolf remained in conversations through Thursday evening, apparently in an attempt to make a deal for a 21st season.

NBC said Friday that it had ordered a new series, “Law & Order: Los Angeles,” or “LOLA” for short. It also renewed “Law & Order: Special Victims Unit” for another season. The network plans to officially announce its 2010-11 schedule on Monday in New York.

NBC is also quietly exploring the possibility with Mr. Wolf that the show may be able to produce some kind of movie or extended retrospective next season to give the series a proper send-off.

Jeff Gaspin, the chairman of NBC Universal Television Entertainment, said in a statement: “The full measure of the collective contributions made by D*** Wolf and his ‘Law & Order’ franchise over the last two decades to the success of NBC and Universal Media Studios cannot be overstated. The legacy of his original ‘Law & Order’ series will continue to make an impact like no other series before.”

Indeed, the original series will still be seen in reruns on cable. Nonetheless, Fred Berner, an executive producer of the show based in New York, said Thursday that the cancellation is a “kick in the gut to New York.”

By one estimate, more than 8,000 people in the city are employed, directly and indirectly, by the series and its two spinoffs. The franchise has been especially important to the many Broadway and Off Broadway actors who make appearances on the shows.

Many will stay employed by the two spinoffs. Still, the end of the original show — often called “the mothership” internally — “will be a devastating blow to the New York City production community,” Mr. Berner said.

Mr. Berner was standing outside a Broadway theater when he was reached on his cellphone Thursday evening. “I guarantee you, every name in the playbill will have appeared on ‘Law & Order,’ one of the three shows,” he said.

Spotting a “Law & Order” shoot on the streets of Manhattan and Brooklyn is almost a rite of passage for New Yorkers.

“It began filming in the City at a time when few series did, and it helped pave the way for the more than 150 television shows based here today, including the ‘Law & Order’ spinoff ‘Special Victims Unit,’ which will continue,” he said.

Mr. Bloomberg noted that the series “helped launch the careers of thousands of talented actors and featured many memorable performances — although my cameos are not among them. We’re grateful to D*** Wolf for choosing New York City as its location for all of these years, and for helping showcase the City’s depth and versatility as a setting and all of the advantages of filming here.”

A senior executive involved in the production of the show who asked not to be identified said that while the show’s quality had held up, the show’s ratings had not in recent years. “There’s no bigger ‘Law & Order’ junkie than I am,” the executive said, “but we’ve been in almost every Upper East Side apartment in New York and explored all those stories.”

The series has averaged about eight million viewers so far this season, half as many as it averaged a decade ago. Still, many in the television business had expected NBC to renew the original series this month, if only to allow Mr. Wolf to beat “Gunsmoke,” a record he has long sought.

Ed Zuckerman, a former co-executive producer of the series, described himself as stunned by the news of the cancellation. “It’s been such a pillar of the television world we all live in,” he said Thursday.

Analysts say “Law & Order” redefined the crime genre on television by juxtaposing the stories of police officers and prosecutors. An off-screen narrator explained the premise of the series at the start of each self-contained hourlong episode: “In the criminal justice system, the people are represented by two separate yet equally important groups: the police, who investigate crime; and the district attorneys, who prosecute the offenders. These are their stories.”

Kerry McCluggage, who was the president of Universal TV when “Law & Order” premiered in 1990, said the series had “influenced all the procedural dramas that have come in its wake.”

The series specialized in so-called “ripped from the headlines” plots that reminded viewers of real-life crimes and trials. “Dick always said the bible for the show is the front page of The New York Post,” Mr. Zuckerman said. (He is an occasional contributor to The New York Times.)

By some estimates, “Law & Order” and its spinoffs represent a $1 billion industry for the many companies involved. Repeats of the series have been all but ubiquitous on multiple channels for more than a decade, and have generated bidding wars among cable channels. After becoming the signature part of the prime-time schedule of the A&E channel in the late 1990’s, TNT bought the rights to the show away in 2000 in what was then a record deal worth about $150 million.

Versions of the show have been produced in Russia and France, and last year, a London variation debuted on ITV in the United Kingdom.

Even before NBC confirmed the cancellation, there was speculation that a cable channel would pick up “Law & Order.” TNT, which resurrected another NBC cop drama, “Southland,” last year, said Thursday evening it was “not in ongoing discussions” about giving a series a second life.

NBC said Friday that the themes and story-lines of “Law & Order” would be evident in the Los Angeles series. The network said in a news release that “casting and pre-production work are continuing.”

Mr. McCluggage, who is now the president of Craftsman Films, said the addition of the L.A. series bodes well for the broader “Law & Order” franchise.

“There are certainly plenty of stories to tell, and there’s a very loyal audience that has spanned across franchises,” he said.