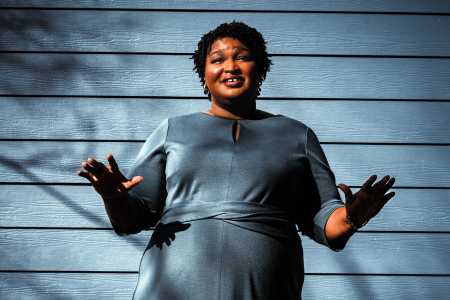 Editor’s note: This story first published on May 25, 2018 (Mississippi Today), after Stacey Abrams won the Democratic nomination for Georgia governor. Abrams, who grew up in Mississippi, has received national attention for her organizing efforts ahead of the 2020 presidential election and U.S. Senate races in Georgia.

Stacey Abrams, who won Georgia’s Democratic nomination for governor, grew up on the Mississippi Gulf Coast, where she and her five siblings learned about service to others from their United Methodist minister parents.

The Rev. Carolyn Abrams said she and her husband, Robert, who both now live in Hattiesburg, tried to teach their children to strive “to make things better for others. Education was key, family and God. You go to church, go to school and look out for each other.”

She said those views are central to her daughter’s political philosophy.

Stacey Abrams, 44, has received national attention in recent days after winning the nomination by a convincing 53-point margin. She is the nation’s first African American woman to win a major party’s nomination for governor and would be Georgia’s first female governor if elected in November.

Carolyn Abrams said her daughter attended pre-school through 10th grade in Gulfport after the family moved back home to Mississippi from Wisconsin. Carolyn Abrams was at the University of Wisconsin on a fellowship.

In Gulfport, Abrams said she and her husband were involved in various ministries, for the homeless, the poor and those in detention. She said their children always participated and would even perform plays at the juvenile detention centers.

“These things, I think, stayed with her,” said Carolyn. “The world could be better. I know she brings this with her in politics.”