Magic take Celtics to OT and on to Game 5

BOSTON (AP)—Put away the brooms. Hold off on those “Beat L.A!” chants. The Boston Celtics still have some work to do before they can play for their second NBA title in three years.

Dwight Howard(notes) had 32 points and 16 rebounds, and Jameer Nelson(notes) made back-to-back 3-pointers in overtime to lead the Orlando Magic to a 96-92 victory over Boston on Monday night to avoid a four-game sweep in the Eastern Conference finals. 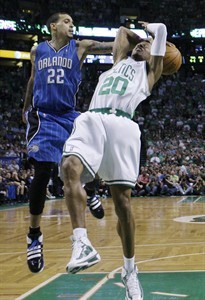 Dressing in the same locker room where the Philadelphia Flyers celebrated their comeback from a 3-0 deficit against the Boston Bruins in the NHL’s East semifinals, the Magic avoided elimination and sent the series back to Orlando for Game 5 on Wednesday night.

“We know that we were down 3-0, and we didn’t want to go home (for the season),” Howard said. “It starts with me and Jameer. Me and Jameer showed our leadership by playing hard. We’ve got to be the leaders for this team. It’s not about points, but just showing everybody, ‘Hey, follow us and we’ll lead the way.”’

No NBA team has ever come back from a 3-0 deficit to win a playoff series.

“At some point, somebody is going to come from 3-0 down and win a series. The only thing I knew for sure was it would start by winning Game 4,” Magic coach Stan Van Gundy said. “I figured that one out. You have to win Game 4. … This was a must-win.”

Paul Pierce(notes) had 32 points and 11 rebounds, and Kevin Garnett(notes) had 14 points and 12 boards for Boston. Ray Allen(notes) hit consecutive 3-pointers in overtime, but Pierce missed two tries in the final minute as the Celtics failed to complete the sweep.

“They don’t want to leave. We’re going to have to throw them out,” said Celtics forward Glen “Big Baby” Davis. “It’s just like somebody renting a house.”

Nelson finished with 23 points and nine assists for the defending Eastern Conference champions, who led by 10 in the second quarter and were up 85-78 with 2:24 left in regulation before Boston scored eight of the next nine points to force overtime at 86-all.

Neither team scored for the first 2:18 of the period before Nelson hit a 3-pointer and then added another 43 seconds later. Allen made a 3-pointer and, after Howard dunked and drew a foul—but missed a free throw—Allen hit another 3 to make it 94-92.

Howard followed up Nelson’s miss with 53 seconds left to make it 96-92, then Garnett sailed a pass over Pierce’s head and into the crowd. Pierce missed a pair of 3-point attempts in the closing seconds.

“There were a couple of plays down the stretch offensively that we botched, plain and simple. We’re kicking ourselves. We had a great opportunity,” Allen said. “There’s no need to panic. We like the position we’re in. But it’s a lesson: We have to take care of the small things and we’ll get to where we want to be.”

Orlando’s revival came just in time to avoid a Celtics walkover that had fans in the new Boston Garden chanting “Beat L.A!” early in the second half of Saturday night’s 23-point Boston victory. The Lakers lead the Suns 2-1 in the Western Conference finals, with Game 4 on Tuesday night in Phoenix.

But there was no more chanting about the Lakers on Monday night.

“I know they (the Celtics players) heard it. They had no choice but to hear it,” Celtics coach Doc Rivers said. “I don’t know if they believed it. We didn’t play well, I know that. I hope that wasn’t the reason.”

Only four times in the history of the North American major pro sports leagues has a team come back to win a playoff series after losing the first three games. It’s been done three times in the NHL—most recently this month by the Flyers in this building—and once in baseball, when theBoston Red Sox came back to beat the New York Yankees in the 2004 AL championship series.

“You never know what can happen,” Magic guard J.J. Redick(notes) said. “We can be like the Red Sox, coming back from 0-3. You never know.”

The Magic’s biggest lead of the series had been a three-point edge in the first quarter of Game 2, but they opened with their highest-scoring quarter of the series on Monday to take a 31-26 lead. They made it 42-32 in the second before Boston cut the deficit to four points at the half.

Orlando led 85-78 on Howard’s three-point play, but Pierce sliced past Howard for a dunk that cut it to five, then Allen hit a 3-pointer to make it 85-83 with 1:41 left. Nelson made one of two free throws, and then Pierce went to the basket and drew a foul, completing the three-point play to make it 86-all with 1:16 left.

But Pierce missed a jumper with a chance to give Boston the lead, Nelson missed for Orlando and Pierce lost his handle on the ball in the final seconds of regulation to send the game into overtime.

NOTES: Sporting goods chain Modell’s sent out an e-mail a few hours before the game advertising Eastern Conference championship gear—if the Celtics won. … Garnett was called for a technical foul with 9:22 left in the third quarter after shoving Howard. … After Rondo left the game with his third foul late in the first half, he went to the locker room with muscle spasms. He returned for the start of the third quarter. He finished with nine points and eight assists. … It was the first playoff overtime for the Celtics since having four overtime games against Chicago in the first round last year.