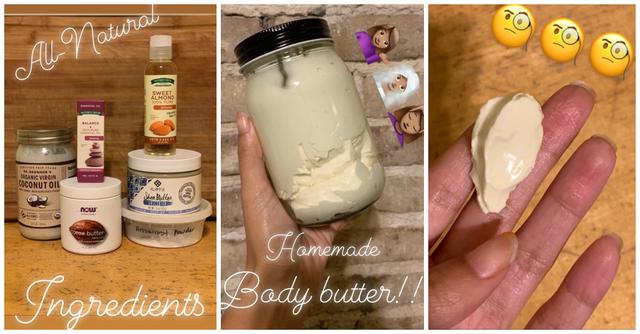 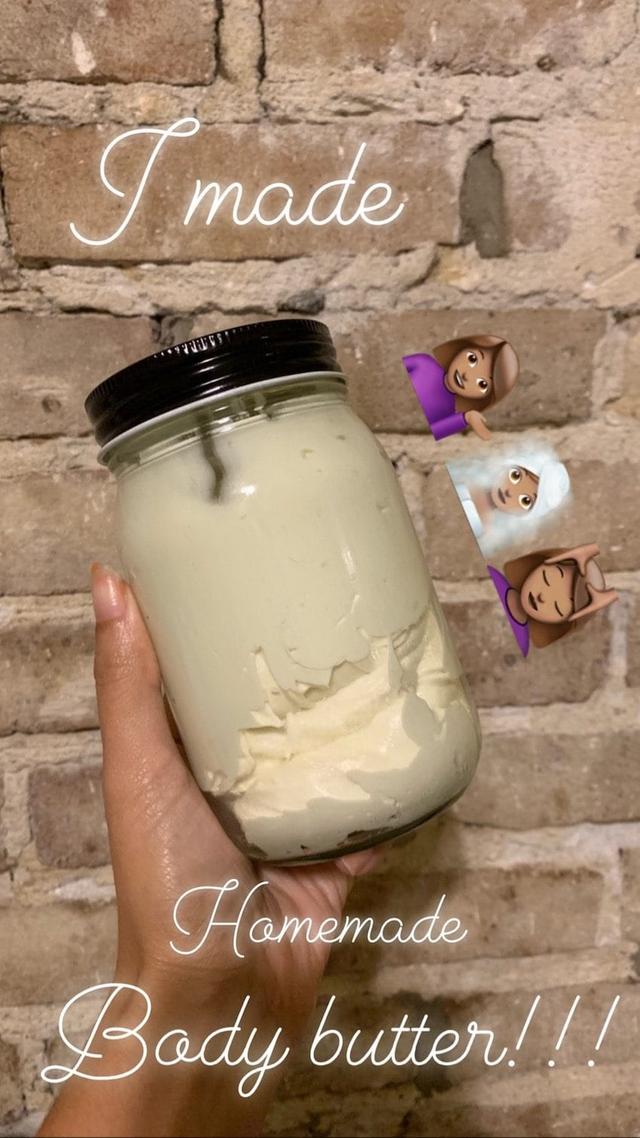 This body butter is relatively simple in terms of equipment and ingredients.

In terms of kitchen equipment, you need a double boiler, measuring cups, and a hand mixer or stand mixer. You’ll also need a glass jar or container to put the body butter into; I used a 14 oz. glass jar.

If you don’t own a double boiler, join the club. You can put together a makeshift one by using a large pot and a glass or Pyrex bowl. 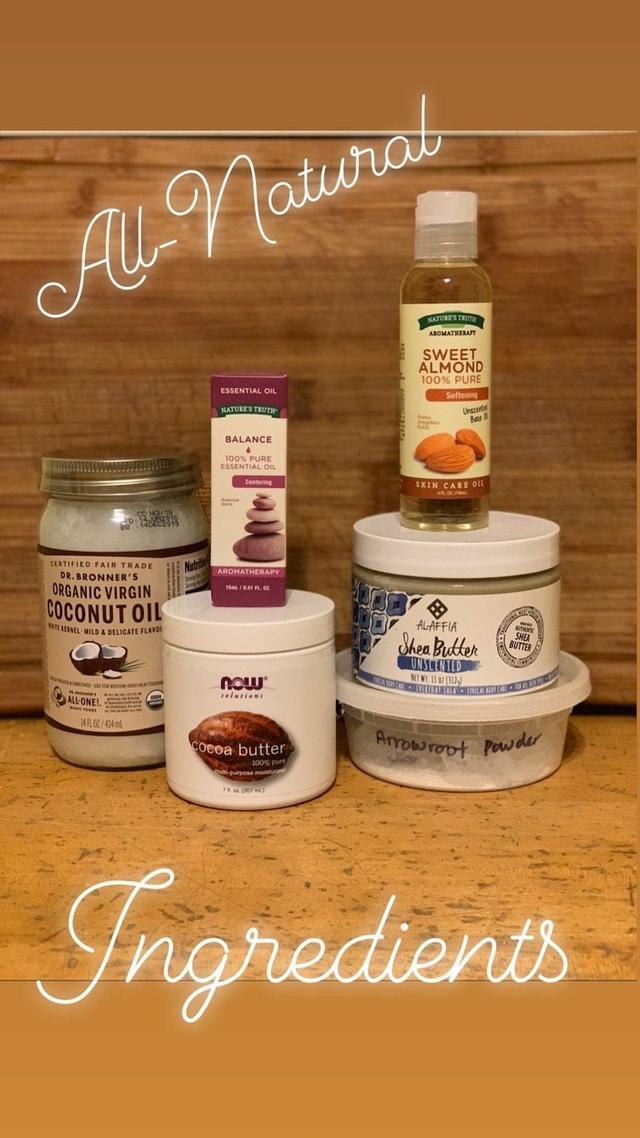 Butter. Shea butter and cocoa butter are both very thick and moisturizing. They also help treat and prevent itchiness, peeling, and irritation. Another popular option is mango butter.

Oil. Coconut oil repairs and moisturizes the skin at the same time. It’s naturally antibacterial and antifungal, and it contains vitamin E. If you want a more lightweight body butter, you can always skip the coconut oil, but I wanted something thick, so I included it.

Carrier oil. I used sweet almond oil, a current favorite of mine because it’s cheap and easily available. It protects your skin from damage, heals, and moisturizes. You can also use a ton of other oils instead, though — jojoba oil, grapeseed oil, calendula oil, olive oil, rosehip oil, or safflower oil, to name a few. Whatever you can get easily will work.

Essential oils. These are mainly used for scent and aromatherapeutic purposes. I usually moisturize at night, when I want to chill out, so I used a relaxing blend called “Balance” that contains geranium, orange, patchouli, sage, and ylang-ylang. You can use whatever essential oils you like based on the mood you want to invoke. 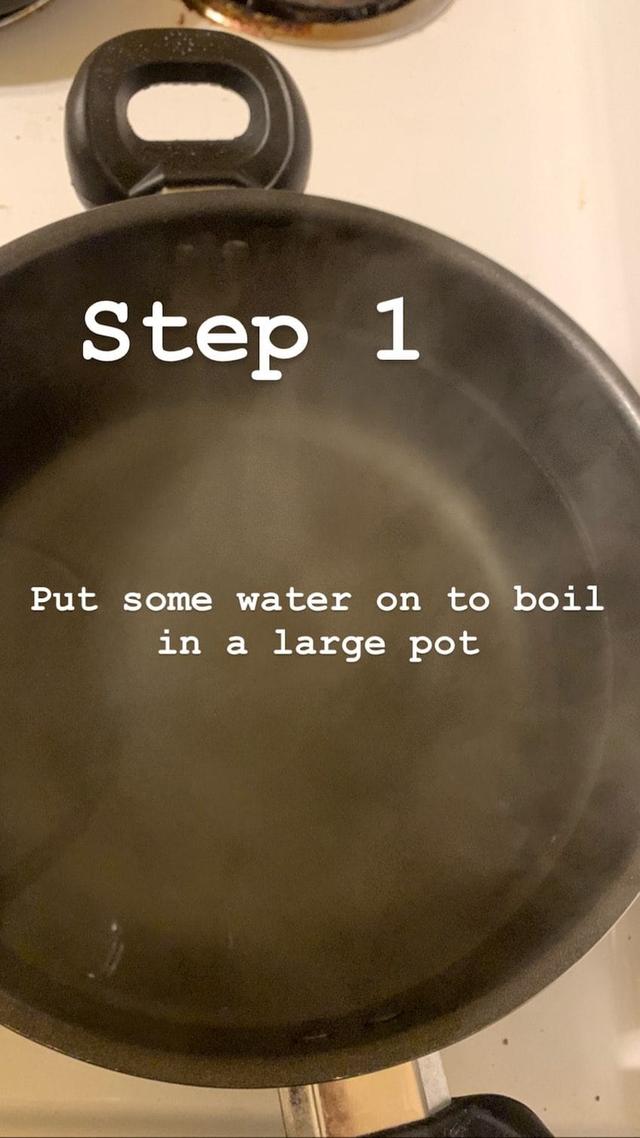 First, I filled a large pot with water and put it on the stove. I put the heat on medium-high.

While waiting for the water to boil, I moved on to the next step. 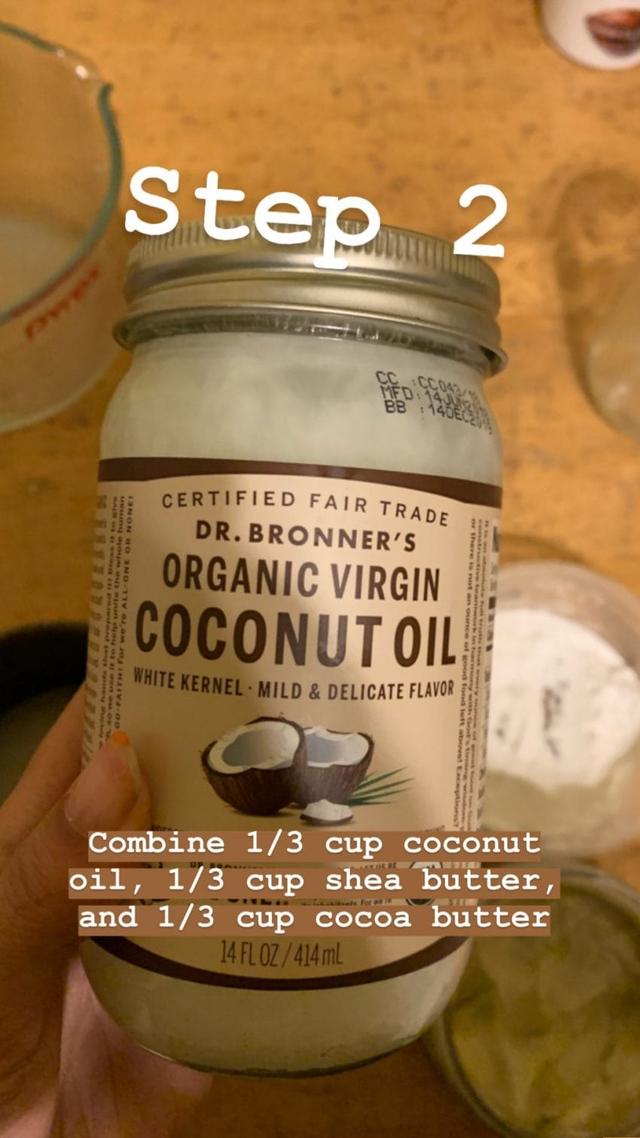 I combined 1/3 cup coconut oil, 1/3 cup shea butter, and 1/3 cup cocoa butter. Basically, you want an even ratio of each butter and oil.

I added the ingredients to a large Pyrex measuring cup. 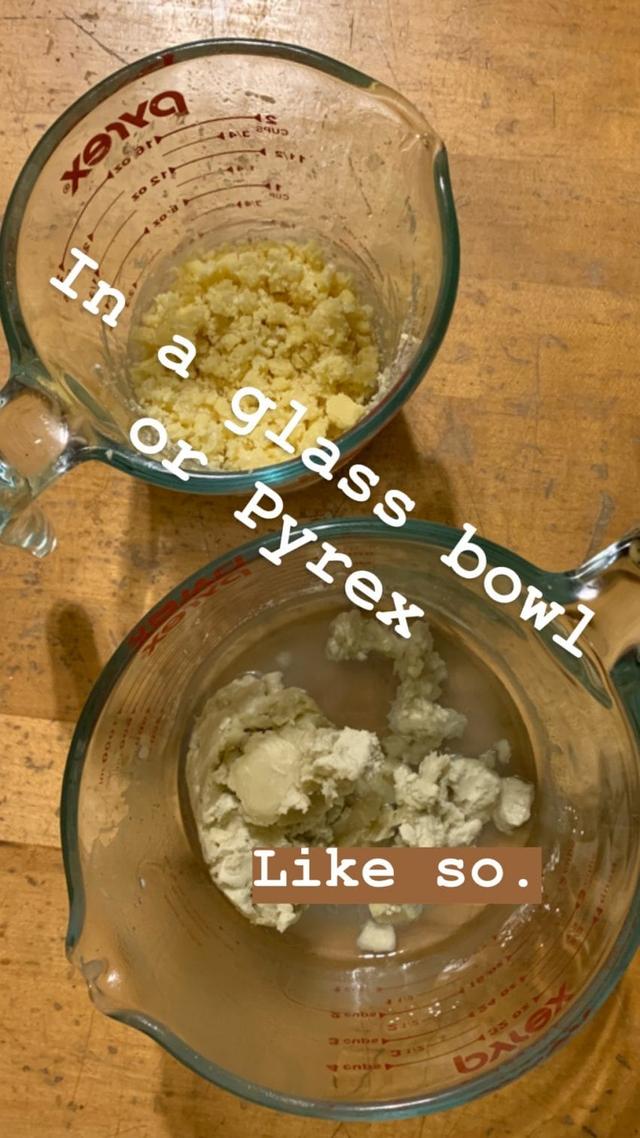 You can also use a large glass bowl — something that will be able to float inside of the large pot of water. 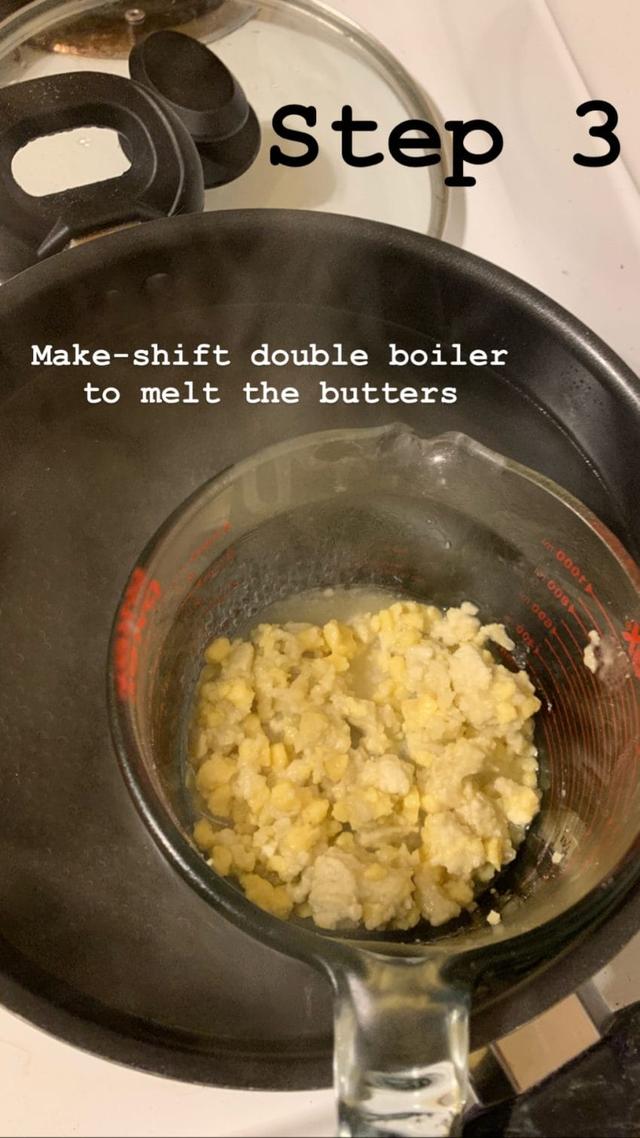 After the water began to boil, I turned it down to a simmer and put the Pyrex cup into the water.

As the butters began to melt, I moved onto step 4. 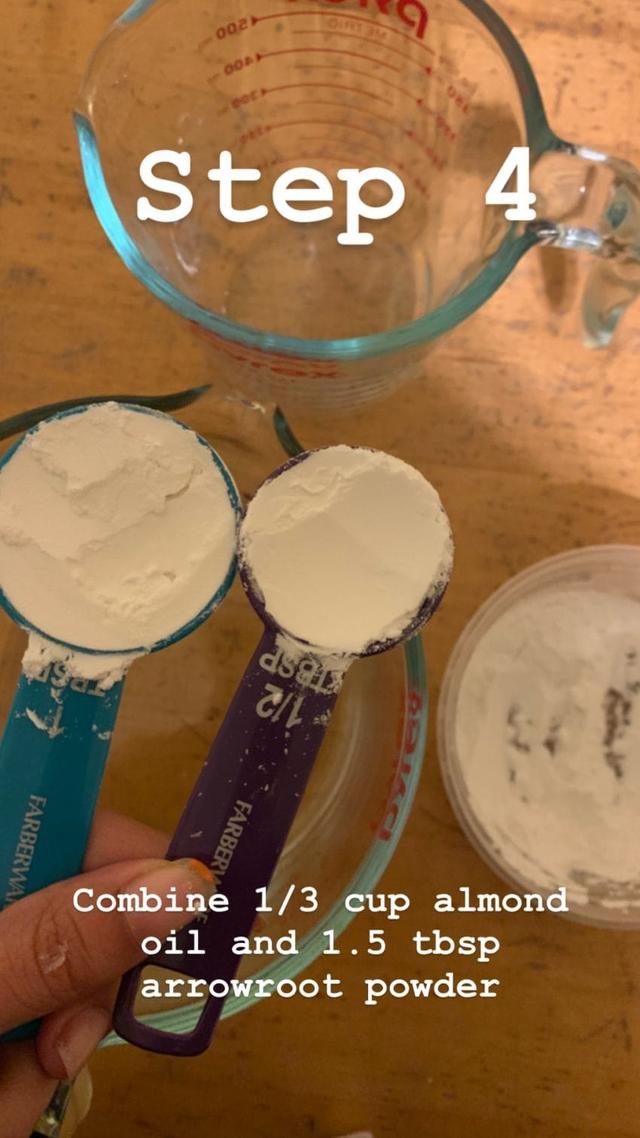 I stirred it with a fork, and then set it aside in a bowl for a bit later. 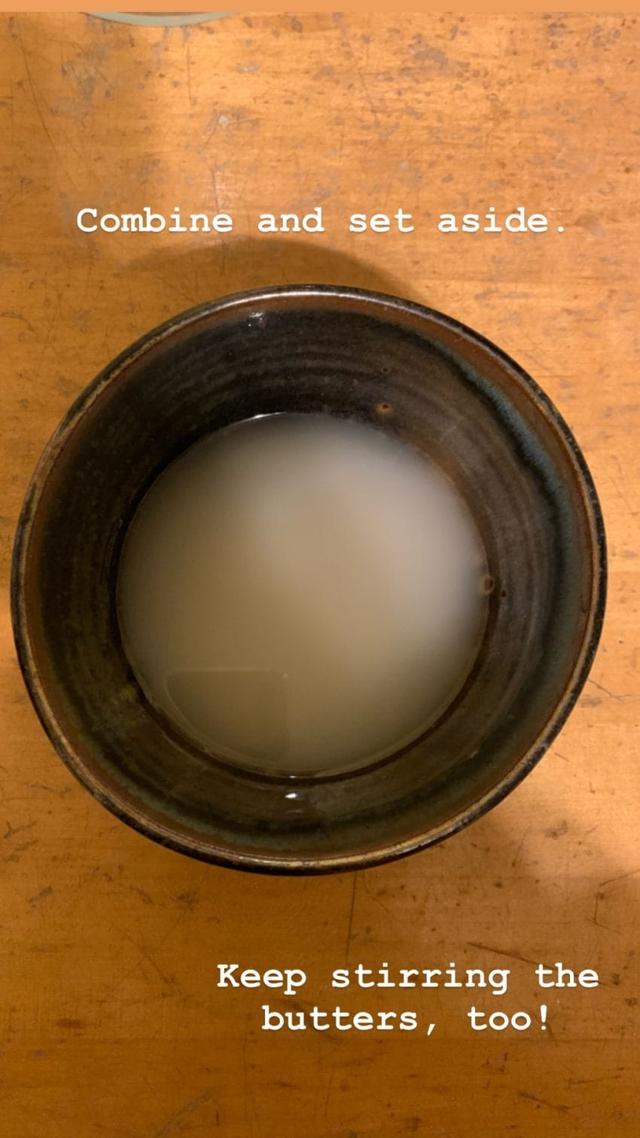 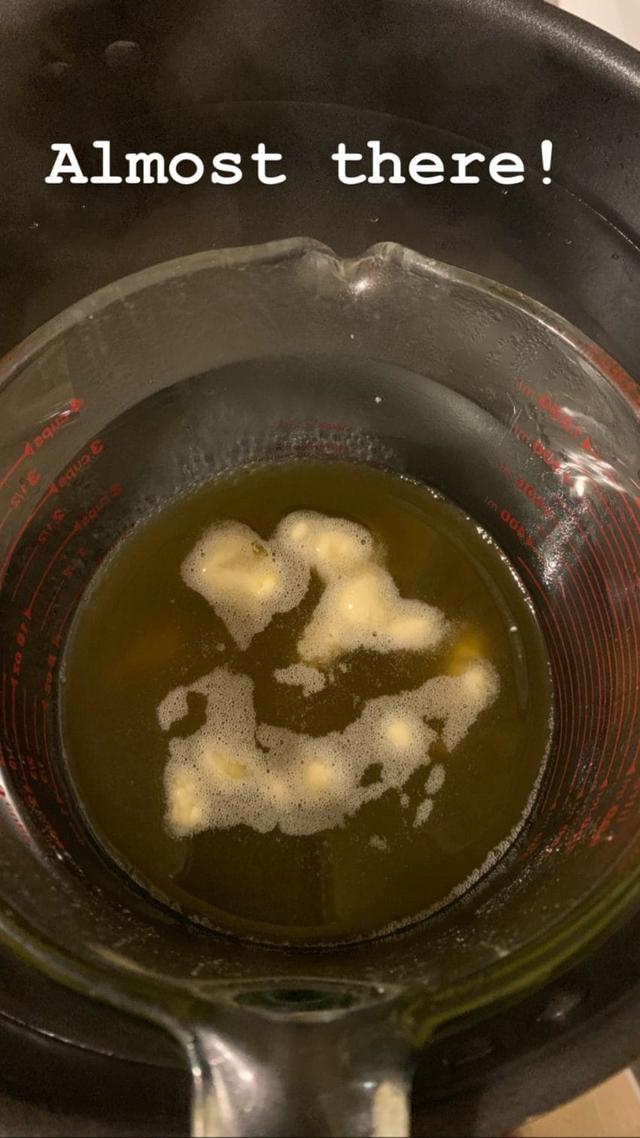 When the butter was completely melted, I took the cup out of the water and turned off the heat. 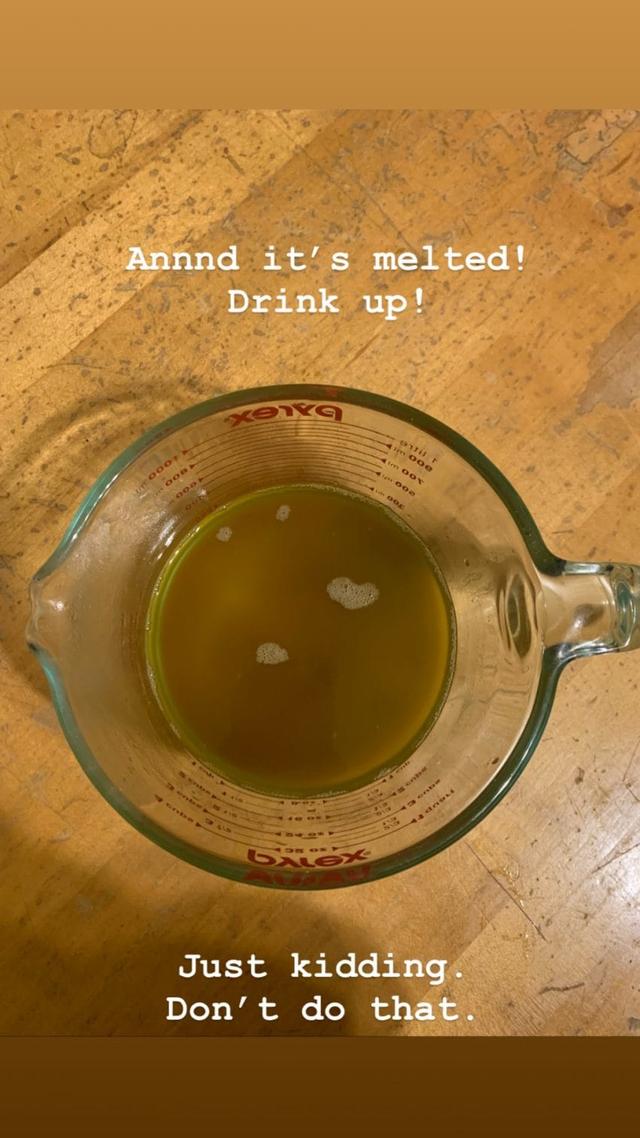 Ready for the next step. 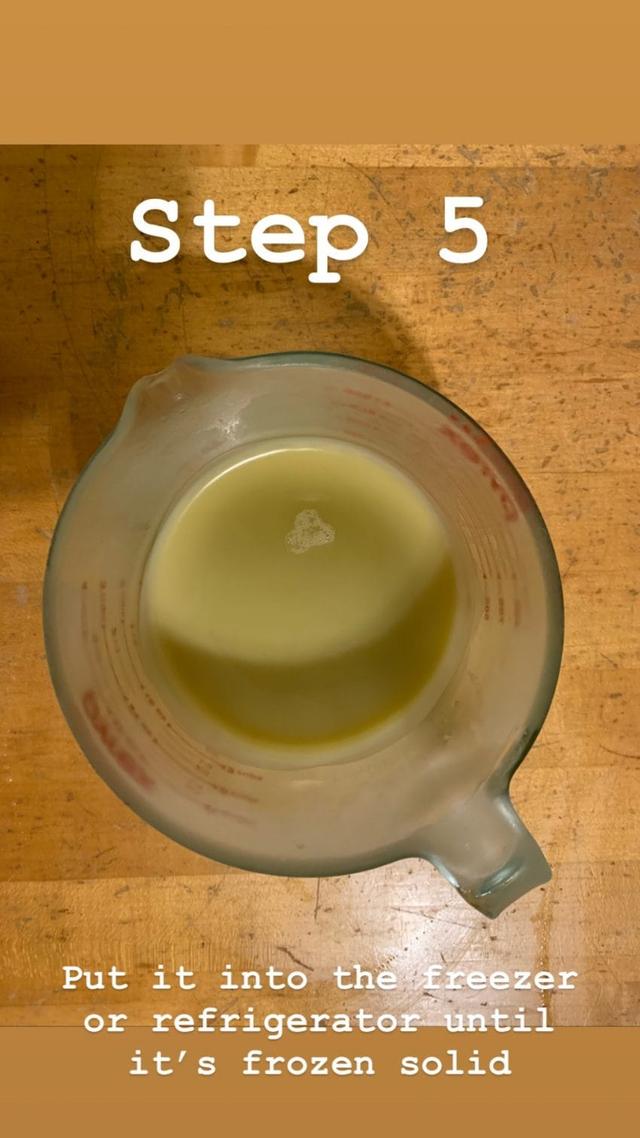 I put the melted butter mix into the freezer to get solid again. I’m not sure how long it took because I lost track of time, but it’s a pretty quick process — under 30 minutes.

Step 6: Add the Rest of the Ingredients 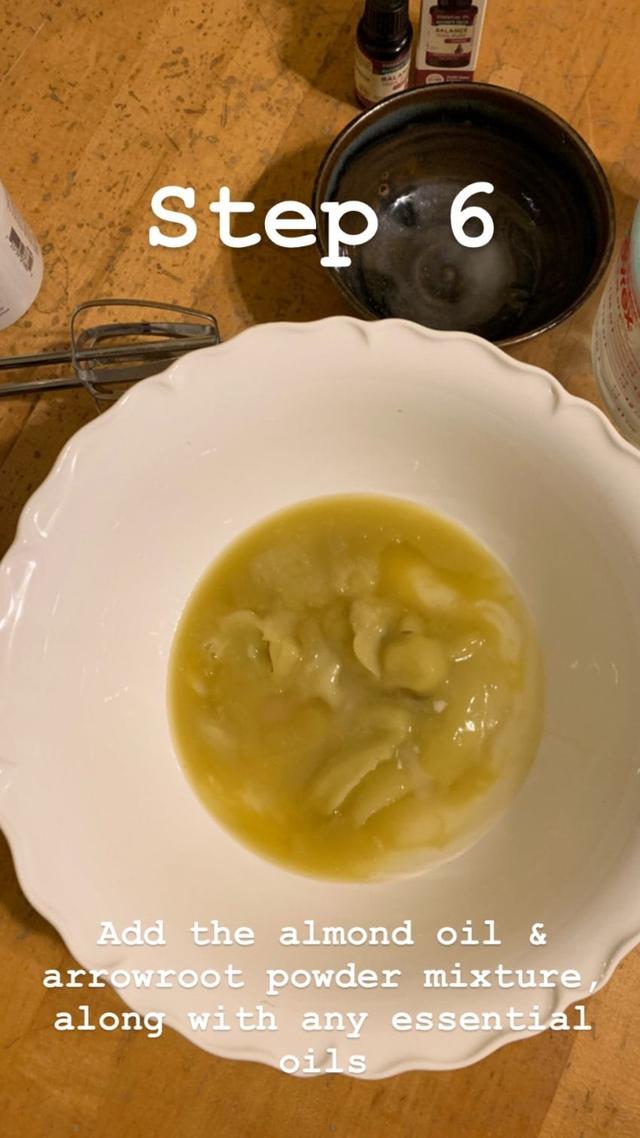 I removed the butter from the freezer when it was mostly hard, then transferred it to a large mixing bowl.

I added the almond oil and arrowroot powder concoction to the bowl. Then I added about 10 drops of essential oils — a blend of geranium, orange, patchouli, sage, and ylang-ylang. 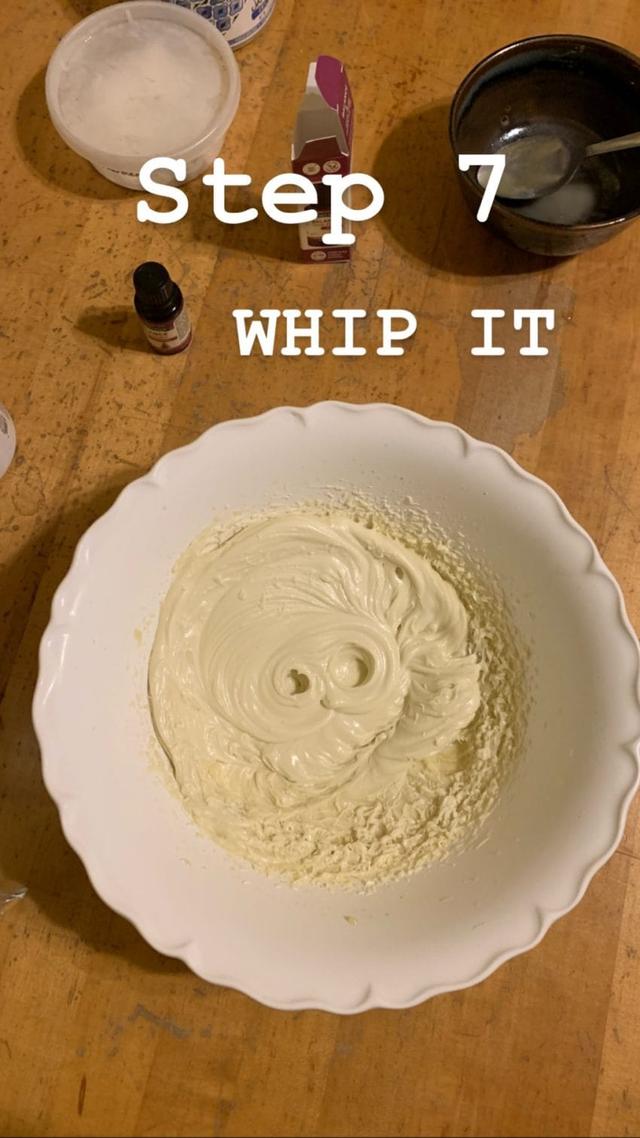 I used a hand mixer on the “low” setting to whip the butter until it reached a creamy, smooth, firm consistency.

At one point, I had to put the mixture back into the freezer to reharden, then start whipping again. 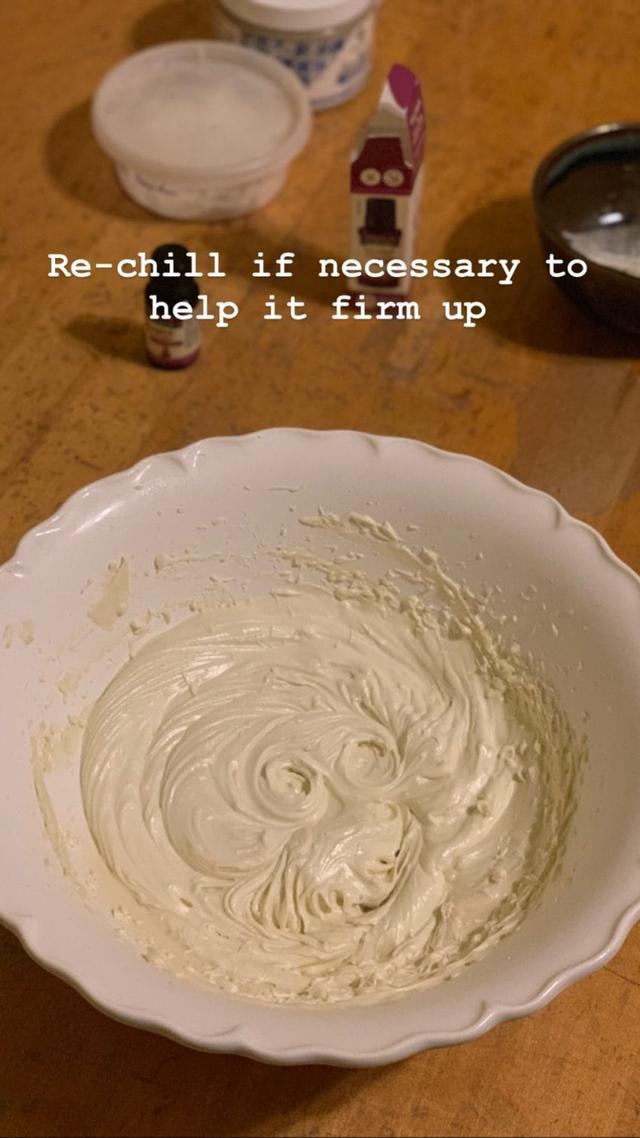 The rule of thumb I saw is that if it stays on a spoon when held upside down, it’s firm enough. 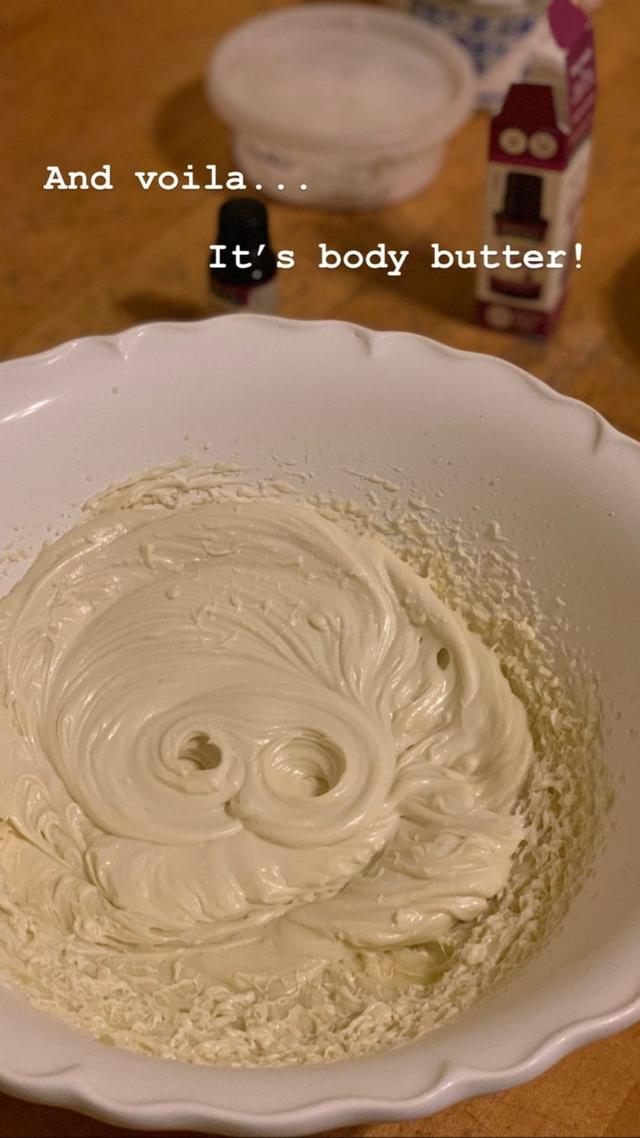 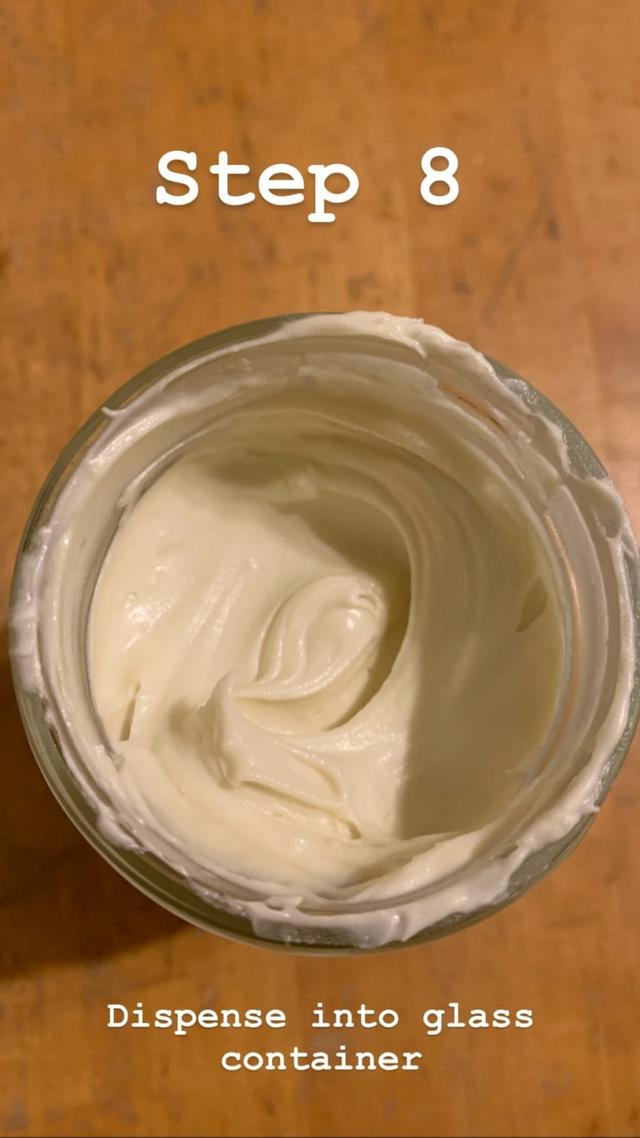 After my butter was nice and whipped, I transferred it into a 14 oz. glass jar — one that, conveniently, used to hold coconut oil. 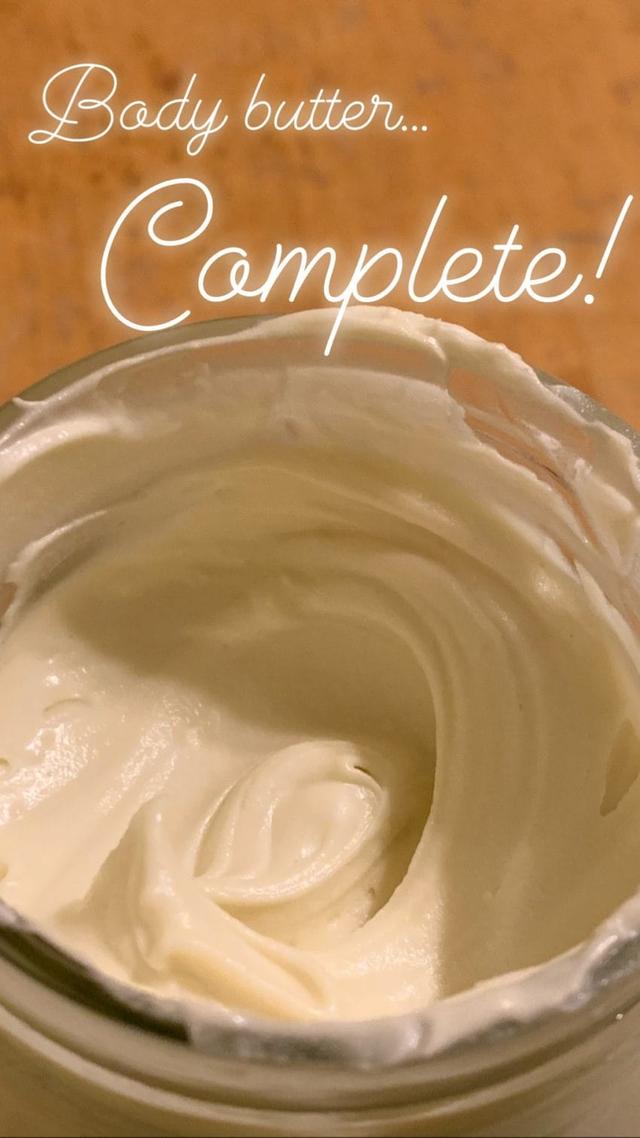 The body butter looked and smelled promising. I was excited to try it out! 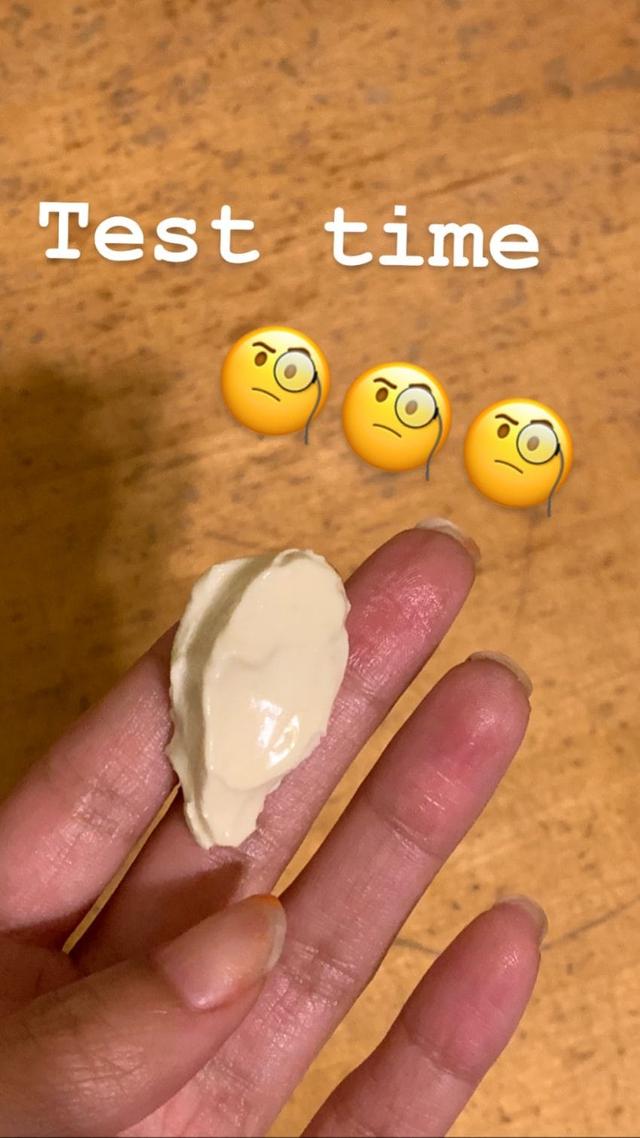 So how did my body butter live up to my expectations?

I wanted it to be ultra-moisturizing. That one is a no-brainer — it’s moisturizing as heck. I slather it on before bed and wake up to super-soft, smooth skin.

I also wanted it to smell good, and it does! This butter smells so soothing and relaxing — the perfect thing to put on my skin before bed. I swear I sleep better after applying it. I’m glad I opted for a premade essential oil blend rather than trying to build my own scent, which is harder than I thought.

Lastly, I wanted the butter to be nongreasy. I didn’t really expect to accomplish this — it’s butter and oil mixed together, so of course it’ll be greasy. But somehow, IT’S NOT. It’s surprisingly firm and fast-absorbing. (It’s a million times better than the DIY shaving cream, which just slid around my skin in a greasy puddle.)

It firmed up even more overnight, resulting in a texture that is just like whipped butter from the grocery store. 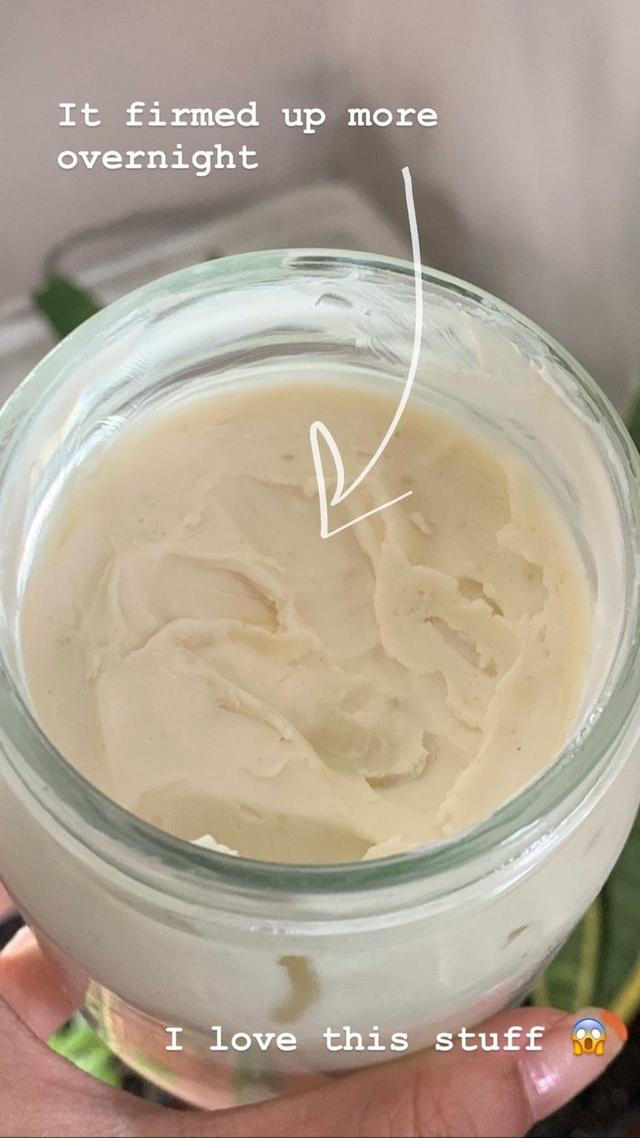