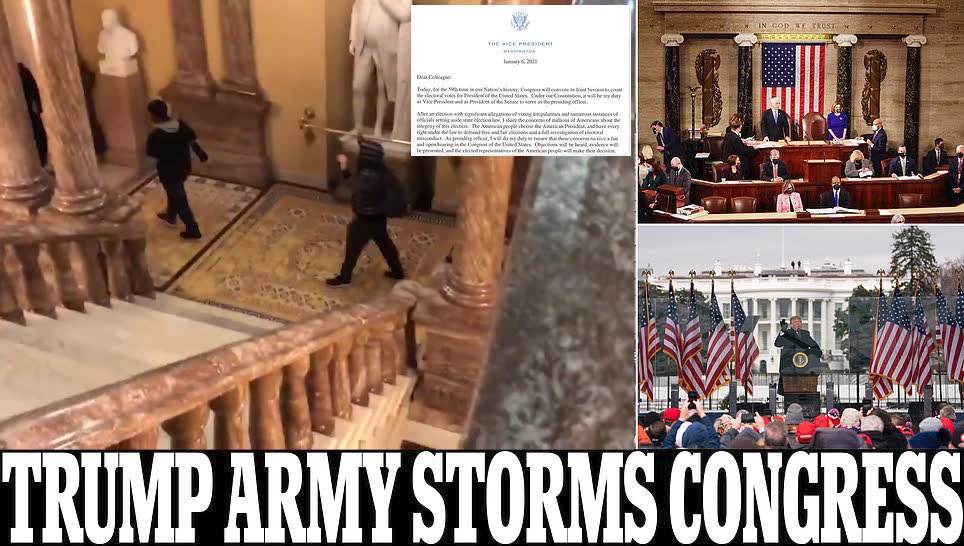 In an unprecedented attack on the U.S. Capitol, protesters supporting President Donald Trump rushed the stairs of the building and smashed windows as they pushed their way inside.

In a massive security breach, the protesters, waving blue Trump flags, made it to the doors of the Senate and House chambers as U.S. Capitol Police locked lawmakers inside for their own safety.

They were heard banging on the doors of the House chamber and yelling outside as police officers rushed lawmakers out of the chamber and to safety.

There were reports of gun shots outside of the House as an armed stand off took place at the doors of the chamber.

‘We’ve been given gas masks on the House floor. Tear gas has been used in the Rotunda,’ wrote Democratic Rep. Gerry Connolly on twitter.

The protesters filled the rotunda, which sets below the dome of the Capitol and is filled with paintings depicting important scenes in the founding of the nation. They also were seen marching through Statuary Hall, the room off the House chamber that is filled with statues of the nation’s founders and used for special ceremonies.

In the crypt of the Capitol, where George Washington was originally supposed to be buried, police and protesters clashed, fighting it out.

‘We now have individuals that have breached the Capitol building. They are in the Rotunda area,’ Capitol police said.

Trump urged his supporters to stay peaceful, in a tweet that came after they had breached the building. At a rally earlier that morning, he had encouraged them to march on the Capitol, where lawmakers were certifying the electoral college vote for Joe Biden.

‘Please support our Capitol Police and Law Enforcement. They are truly on the side of our Country. Stay peaceful!,’ the president wrote.

But he did not tell them to leave.

U.S. Capitol Police used tear gas as hundreds of people were seen climbing the marble steps outside the building. They banged on the locked doors of the Capitol and smashed the glass in the doors.