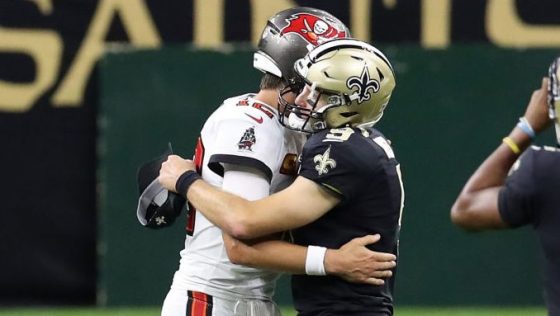 There are not many NFL records Tom Brady hasn’t set, but on Sunday the 43-year-old managed to find another one to break and again etch his name into the history books.

When Brady and his Tampa Bay Buccaneers took to the field in Las Vegas, he trailed Drew Brees by three career touchdowns. The New Orleans Saints’ quarterback threw a pair of touchdowns earlier in the day to stretch his career tally to 558, increasing his lead over Brady’s 555.

But if Brady’s 20-year career has told us anything, it’s that he thrives under pressure.

As the Buccaneers offense caught fire during their 45-20 victory over the Las Vegas Raiders, the former New England Patriots quarterback threw four touchdowns — he also ran in another — to move ahead of Brees on the NFL’s all-time touchdown pass list.

On third-and-goal with 3:13 remaining, Brady found Tyler Johnson in the back of the end zone for the 559th touchdown pass of his career.

Having moved from the Patriots in the offseason, Brady has thrown 18 touchdowns in his first six games away from head coach Bill Belichick.

The win was the Buccaneers’ third of the season, moving them above the Saints and to the top the NFC South division.