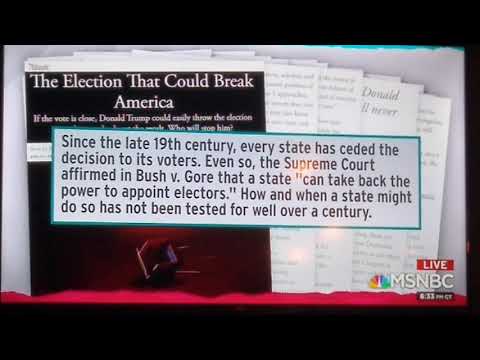 If the vote is close, Donald Trump could easily throw the election into chaos and subvert the result. Who will stop him

There is a cohort of close observers of our presidential elections, scholars and lawyers and political strategists, who find themselves in the uneasy position of intelligence analysts in the months before 9/11. As November 3 approaches, their screens are blinking red, alight with warnings that the political system does not know how to absorb. They see the obvious signs that we all see, but they also know subtle things that most of us do not. Something dangerous has hove into view, and the nation is lurching into its path.

The danger is not merely that the 2020 election will bring discord. Those who fear something worse take turbulence and controversy for granted. The coronavirus pandemic, a reckless incumbent, a deluge of mail-in ballots, a vandalized Postal Service, a resurgent effort to suppress votes, and a trainload of lawsuits are bearing down on the nation’s creaky electoral machinery.

Something has to give, and many things will, when the time comes for casting, canvassing, and certifying the ballots. Anything is possible, including a landslide that leaves no doubt on Election Night. But even if one side takes a commanding early lead, tabulation and litigation of the “overtime count”—millions of mail-in and provisional ballots—could keep the outcome unsettled for days or weeks.

If we are lucky, this fraught and dysfunctional election cycle will reach a conventional stopping point in time to meet crucial deadlines in December and January. The contest will be decided with sufficient authority that the losing candidate will be forced to yield. Collectively we will have made our choice—a messy one, no doubt, but clear enough to arm the president-elect with a mandate to govern.

As a nation, we have never failed to clear that bar. But in this election year of plague and recession and catastrophized politics, the mechanisms of decision are at meaningful risk of breaking down. Close students of election law and procedure are warning that conditions are ripe for a constitutional crisis that would leave the nation without an authoritative result. We have no fail-safe against that calamity. Thus the blinking red lights.

“We could well see a protracted postelection struggle in the courts and the streets if the results are close,” says Richard L. Hasen, a professor at the UC Irvine School of Law and the author of a recent book called Election Meltdown. “The kind of election meltdown we could see would be much worse than 2000’s Bush v. Gore case.”

A lot of people, including Joe Biden, the Democratic Party nominee, have mis­conceived the nature of the threat. They frame it as a concern, unthinkable for presidents past, that Trump might refuse to vacate the Oval Office if he loses. They generally conclude, as Biden has, that in that event the proper authorities “will escort him from the White House with great dispatch.”

The worst case, however, is not that Trump rejects the election outcome. The worst case is that he uses his power to prevent a decisive outcome against him. If Trump sheds all restraint, and if his Republican allies play the parts he assigns them, he could obstruct the emergence of a legally unambiguous victory for Biden in the Electoral College and then in Congress. He could prevent the formation of consensus about whether there is any outcome at all. He could seize on that un­certainty to hold on to power.

Trump’s state and national legal teams are already laying the groundwork for postelection maneuvers that would circumvent the results of the vote count in battleground states. Ambiguities in the Constitution and logic bombs in the Electoral Count Act make it possible to extend the dispute all the way to Inauguration Day, which would bring the nation to a precipice. The Twentieth Amendment is crystal clear that the president’s term in office “shall end” at noon on January 20, but two men could show up to be sworn in. One of them would arrive with all the tools and power of the presidency already in hand.

“We are not prepared for this at all,” Julian Zelizer, a Prince­ton professor of history and public affairs, told me. “We talk about it, some worry about it, and we imagine what it would be. But few people have actual answers to what happens if the machinery of democracy is used to prevent a legitimate resolution to the election.”

Nineteen summers ago, when counterterrorism analysts warned of a coming attack by al‑Qaeda, they could only guess at a date. This year, if election analysts are right, we know when the trouble is likely to come. Call it the Interregnum: the interval from Election Day to the next president’s swearing-in. It is a temporal no-man’s-land between the presidency of Donald Trump and an uncertain successor—a second term for Trump or a first for Biden. The transfer of power we usually take for granted has several intermediate steps, and they are fragile.

The Interregnum comprises 79 days, carefully bounded by law. Among them are “the first Monday after the second Wednesday in December,” this year December 14, when the electors meet in all 50 states and the District of Columbia to cast their ballots for president; “the 3d day of January,” when the newly elected Congress is seated; and “the sixth day of January,” when the House and Senate meet jointly for a formal count of the electoral vote. In most modern elections these have been pro forma milestones, irrelevant to the outcome. This year, they may not be.

“Our Constitution does not secure the peaceful transition of power, but rather presupposes it,” the legal scholar Lawrence Douglas wrote in a recent book titled simply Will He Go? The Interregnum we are about to enter will be accompanied by what Douglas, who teaches at Amherst, calls a “perfect storm” of adverse conditions. We cannot turn away from that storm. On November 3 we sail toward its center mass. If we emerge without trauma, it will not be an unbreakable ship that has saved us.

Let us not hedge about one thing. Donald Trump may win or lose, but he will never concede. Not under any circumstance. Not during the Interregnum and not afterward. If compelled in the end to vacate his office, Trump will insist from exile, as long as he draws breath, that the contest was rigged.

Trump’s invincible commitment to this stance will be the most important fact about the coming Interregnum. It will deform the proceedings from beginning to end. We have not experienced anything like it before.

Maybe you hesitate. Is it a fact that if Trump loses, he will reject defeat, come what may? Do we know that? Technically, you feel obliged to point out, the proposition is framed in the future conditional, and prophecy is no man’s gift, and so forth. With all due respect, that is pettifoggery. We know this man. We cannot afford to pretend.

Trump’s behavior and declared intent leave no room to suppose that he will accept the public’s verdict if the vote is going against him. He lies prodigiously—to manipulate events, to secure advantage, to dodge accountability, and to ward off injury to his pride. An election produces the perfect distillate of all those motives.

Pathology may exert the strongest influence on Trump’s choices during the Interregnum. Well-supported arguments, some of them in this magazine, have made the case that Trump fits the diagnostic criteria for psychopathy and narcissism. Either disorder, by its medical definition, would render him all but incapable of accepting defeat.

Conventional commentary has trouble facing this issue squarely. Journalists and opinion makers feel obliged to add disclaimers when asking “what if” Trump loses and refuses to concede. “The scenarios all seem far-fetched,” Politico wrote, quoting a source who compared them to science fiction. Former U.S. Attorney Barbara McQuade, writing in The Atlantic in February, could not bring herself to treat the risk as real: “That a president would defy the results of an election has long been unthinkable; it is now, if not an actual possibility, at the very least something Trump’s supporters joke about.”

But Trump’s supporters aren’t the only people who think extra­constitutional thoughts aloud. Trump has been asked directly, during both this campaign and the last, whether he will respect the election results. He left his options brazenly open. “What I’m saying is that I will tell you at the time. I’ll keep you in suspense. Okay?” he told moderator Chris Wallace in the third presidential debate of 2016. Wallace took another crack at him in an interview for Fox News this past July. “I have to see,” Trump said. “Look, you—I have to see. No, I’m not going to just say yes. I’m not going to say no.”

How will he decide when the time comes? Trump has answered that, actually. At a rally in Delaware, Ohio, in the closing days of the 2016 campaign, he began his performance with a signal of breaking news. “Ladies and gentlemen, I want to make a major announcement today. I would like to promise and pledge to all of my voters and supporters, and to all the people of the United States, that I will totally accept the results of this great and historic presidential election.” He paused, then made three sharp thrusts of his forefinger to punctuate the next words: “If … I … win!” Only then did he stretch his lips in a simulacrum of a smile.

The question is not strictly hypothetical. Trump’s respect for the ballot box has already been tested. In 2016, with the presidency in hand, having won the Electoral College, Trump baldly rejected the certified tallies that showed he had lost the popular vote by a margin of 2,868,692. He claimed, baselessly but not coincidentally, that at least 3 million undocumented immigrants had cast fraudulent votes for Hillary Clinton.

All of which is to say that there is no version of the Interregnum in which Trump congratulates Biden on his victory. He has told us so. “The only way they can take this election away from us is if this is a rigged election,” Trump said at the Republican National Convention on August 24. Unless he wins a bona fide victory in the Electoral College, Trump’s refusal to concede—his mere denial of defeat—will have cascading effects.