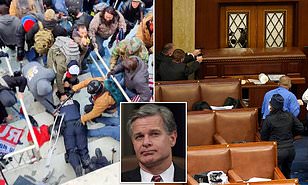 The FBI circulated an internal memo warning that a ‘war’ was coming to the Capitol the day before thousands stormed it but did nothing to stop it, it was revealed on Tuesday, as the bureau said nothing about its total failure to protect Congress for the sixth day running.

On January 5, the FBI’s office in Norfolk, Virginia, blasted an internal memo which cited social media posts talking about spilling the blood of ‘BLM slave soldiers’ on the Capitol.

The memo was obtained by The Washington Post on Tuesday.

It read: ‘As of 5 January 2021, FBI Norfolk received information indicating calls for violence in response to ‘unlawful lockdowns’ to begin on 6 January 2021 in Washington. D.C.

‘An online thread discussed specific calls for violence to include stating “Be ready to fight. Congress needs to hear glass breaking, doors being kicked in, and blood from their BLM and Pantifa slave soldiers being spilled.

‘Get violent. Stop calling this a march, or rally, or a protest. Go there ready for war.

‘We get our President or we die. NOTHING else will achieve this goal.’