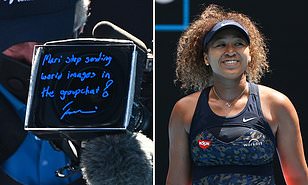 The Japanese women’s world number three, 23, is in her second Melbourne grand slam final in three years after dominating childhood idol and US superstar Serena Williams in straight sets on Thursday.

Osaka sent tennis viewers around the world into meltdown with a peculiar message aimed at her older sister Mari back home following her post-match interview on court.

‘Mari stop sending werid (sic) images in the groupchat!’ she signed off on a television lens.

‘She sends really weird images and apparently I spelled ‘weird’ wrong so my bad,’ she told Eurosport.

‘She sends really strange images in the group chat to me and my friends. Sometimes it’s a bit disturbing but we love her either way.’

Her sister hit back with an Instagram story with one of the bizarre images of an eyeball being licked.