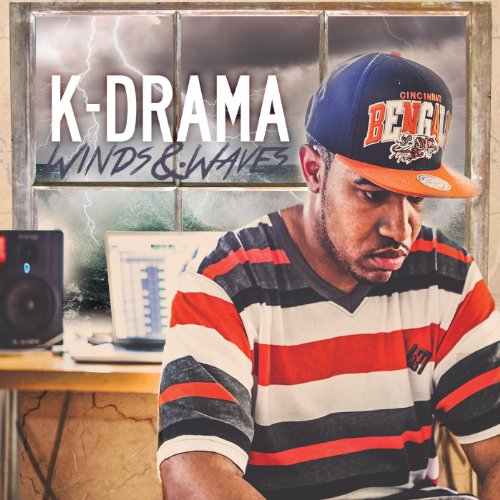 When I wrote the review for Andy Mineo's "Heroes for Sale", I said the album was very open and personal. K-Drama's 7th studio project, "Winds & .Waves" is also very personal. K Drama gives you a look at trials and tribulations as a Christian emcee. A lot Christian artist like to put on a front like they have everything perfect in their life. Most do it because they feel they have too. I hate cliches but this album keeps it 100%. Drama is telling you, "This is what I go though; this is what I been though, even as a Christian artist and minister of the Gospel."
Background:
K- Drama started working on the project in February of 2012, finished it in July of 2013 and, independently released it on September 24th, 2013. It features guess appearances by D-Maub, Chrade Jones, Lindsay Orr, Sunny Jones, his kids, Ricardo Lambert, Deacon Das, and Matthew Bracey. Drama handles his own production except for the track "Working Out For My Good," which was produced by Caryl "Beatman" Reid. When I asked Drama about the title and theme he said:

"As I rap about my life's winds & waves over .wav files, I pray all see that Jesus controls them for His glory."

The project has been getting pretty good reviews from fans and websites like dasouth.com since it dropped.

"K-Drama touches on a variety of topics on Winds and .Waves that range from struggles as a full time artist, to verbal and emotional child abuse. This review could have been filled with quote after quote and well deserved accolades, but in all honesty it wouldn't do this album justice. You just have to hear it for yourself to appreciate it. It’s always encouraging when you hear CHH that’s created for the common man. Winds and .Waves displays a vulnerability that we all deal with at some point. In a brief conversation with K-Drama, he described Winds and .Waves as the Dark Knight of all his albums. His comparison is not at all far-fetched because, in my humble opinion, this is K-Drama’s finest work."
-Dasouth.com

"There were several reasons why I gave this album 4 ½ stars. Wind & Waves is a 16 track album, with that being said ALL the songs were good, but some I didn't really get into like I wanted too. With that being said, I wholeheartedly believe in the ministry that God has placed on and in K-drama so I know that what may not be appealing to me, may appeal to someone else. The five songs that I picked as well as some others did everything for me, they were great! I appreciate the heart for God that K-drama has and his transparency."
-z180radio.com

Lyrics & Message:
The first single was "FWD". It's a solid message about being patient as an artist and as an Christian man.

"I was facing things that I wished I didn't have to face such as my father passing away, lack of beat placements, financial hardships, doubts, etc. that lead me to ask God why I had to go through all of those things.  Eventually I learned patience & endurance through the struggle & wrote FWD."
- K-Drama

This is a joint K - Drama fans will love. The beat reminds me a little of K-Drama's big hit "Air Jordan On Em". "Rocket" is a sermon that  will connect with anyone who is a fan of comics and video games. "You Don't Need That" is a message every Christian artist (and blogger) needs to hear. Drama talks about chasing after mans approval and the things Christian artist will do to make themselves seem bigger then they really are.

"I've seen a number of Christian rappers who seem insecure because they don't have as many Twitter followers as others. Some have even bought fake followers to make it seem like a lot of people follow them.  We shouldn't give people a false impression so that they value us.  God values us no matter how popular we are.  We should be seeking His approval, not the approval of man." -K-Drama

"Shine" is powerful and moving. I needed this song when I was younger. It was kind of dope to hear his kids bringing the inspirational message home at the end. I see a Jones family album coming soon lol. "Stadium Praise" will get you amped. The beat goes hard. It sounds like something Young Jezzy or Rick Ross would be on. I really look forward to hearing this joint live.
I feel like an insider when it comes to "Hundred Or A Thousand". The first time I saw K -Drama perform was at Flavorfest 12. The crowd was a pretty decent size but K - Drama brought the heat like he sold out Madison Square Garden. I was trying to get an interview with him at Flavorfest but it didn't work out. About a month or so later he hit me up to tell me he was performing near me and if I came to the show I could get an interview. So I met him there and to be real, you can tell he was a little disappointed with the turn out. He even sent texts to his friends and family. The same family that picked him up from the airport the day before. I think about 15 people where there. K-Drama told me he felt bad because they (the promoters) had to have all these car washes to bring him out. But when he hit the stage...My lawd! He rocked it like the room was packed. There are some Christian artists and even preachers who will not show up for a low crowd.
"Let It All Go" is my favorite track on the album for a few reasons. For one the production is dope. I'm a fan of beats that use a lot of keys. The synths are hypnotic. I also felt connected to this song through the message. It's almost as if this song is about me. In this track K-Drama talks about the death of his dad and how it affected him. He digs deeper and talks about his flaky relationship with a father that spent more time with cocaine than his own family.

"My dad hurt me to the core, for most of my life, by him I felt ignored, when we did talk he always said he would take me fishing, but he never took me though, he was always missing. He treated crack like it was his son, and when he made his runs, me and moms where struggling just to get it done...and thoughts like this could make me bitter, but through the power of the Holy Ghost he makes me bigger."

I lost my Dad three years ago. He was not addicted to drugs but we had a rough relationship that still affects me today. This is not the place to get into the details; but I really feel where K-Drama is coming from.The song gets more serious in the second verse where Drama talks about his own faults.
"I was holding on to secrets, the Holy Ghost kept telling me that I can't keep it, what's done in the dark will come to light." Drama talks about how keeping his sins a secret created a burden and stress that made him sick

" I called my wife in the room, and took off my mask and costume."

This verse spoke to my spirit because I also had secrets I thought I would "take to the grave."

"Let it all go is a true story. It was spawned from my dad's death and the bitterness I felt because of all the things we didn't do together. That only made me face my own skeletons. God used that moment to make me realize I must forgive others as He first forgave me."

Yahweh really used Drama on this song.
Production:
People who are familiar with K-Drama will tell you he is more than a good emcee. He's actually one of the dopest producers in Christian Hip Hop. So dope beats are what you would expect here and he does not disappoint. The beats on this joint bang. Songs like "Stadium Praise" knock like the onetime at the door in the projects. The violin loop on "Hundred Or A Thousand" sounds like Miri Ben Ari has a guest spot on the song.  But this also leads to the only issue I have with the album; K-Drama producing the whole thing. I would like to either see Drama work with other producers or I would like to see him experiment and play with other sounds and flavors. 808's are cool but maybe a few boom bap, hip hop joints sprinkled in will take him to the next level to get him closer to a classic project. And for all those not knowing, Drama studied under Theory Hazit so I know he has that raw in him.
Winds & .Waves is good food for your spirit. It's raw, open and honest. And when you look at the total package, the music, production, message in the songs, the fact that K-Drama designed the cover himself... this is a manual for the independent Christian emcee. Not just because of how it was created, but also the message it delivers. This is what christian music should sound like!
BUY THE ALBUM NOW FROM THE ORACLE
Tags: &, waves, album, k-drama, music, review, winds
★
★
★
★
★
Votes: 0
E-mail me when people leave their comments –
Follow
Posted by Prince Malachi The First