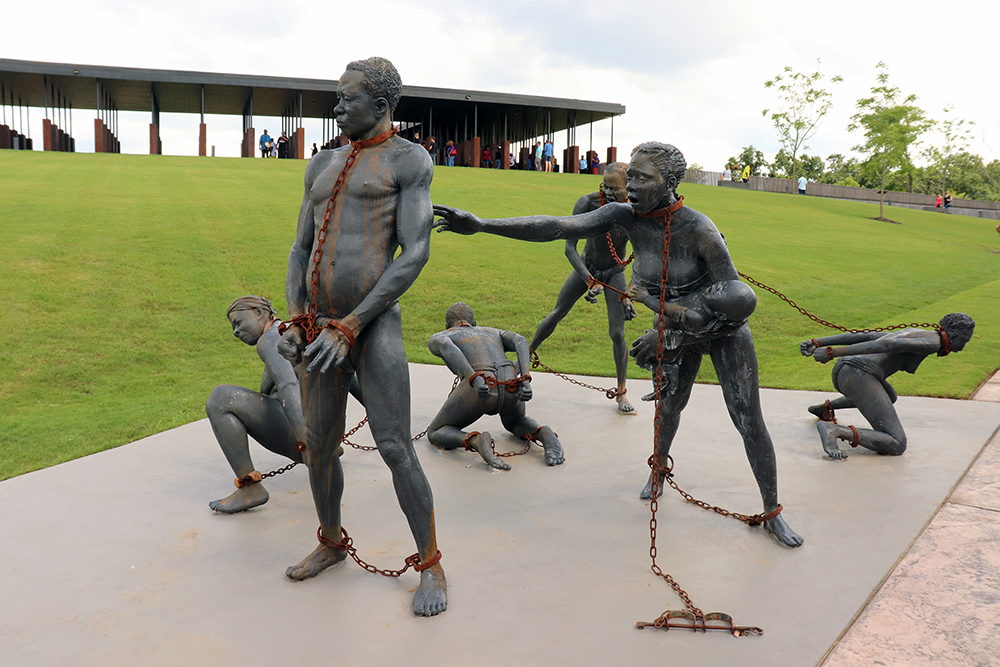 This photo shows a bronze statue called “Raise Up” as part of the display at the National Memorial for Peace and Justice, a memorial to honor thousands of people killed in racist lynchings, on April 23, 2018, in Montgomery, Alabama. The national memorial aims to teach about America’s past in hope of promoting understanding and healing. (AP Photo/Brynn Anderson)

But one aspect of the work has not received the treatment it deserves. Tucked into the back of the book is an appendix that contains a scathing description of his experience of American Christianity:

The slave prison and the church stand near each other. The clanking of fetters and the rattling of chains in the prison, and the pious psalm and solemn prayer in the church, may be heard at the same time. The dealers in the bodies and souls of men erect their stand in the presence of the pulpit, and they mutually help each other. The dealer gives his blood-stained gold to support the pulpit, and the pulpit, in return, covers his infernal business with the garb of Christianity. Here we have religion and robbery the allies of each other — devils dressed in angels’ robes, and hell presenting the semblance of paradise.

In its 2018 American Values Survey, PRRI, the research firm that I lead, confirmed a disturbing pattern: While the overt connections between slavery and Christianity have long since been abandoned, the connections between white supremacy and Christianity continue to exist today. Not only among white evangelicals in the South but among white mainline Protestants in the Midwest and white Catholics in the Northeast, survey after survey shows that holding more racist attitudes is independently associated with a higher probability of identifying as a white Christian; and conversely, adding Christianity to the average white person’s identity moves him or her toward more, not less, affinity for white supremacy.

White supremacy lives on today not just in explicitly or consciously held attitudes among white Christians; it has become, down through the generations, deeply integrated into the cultural DNA of white Christianity itself.

That last statement, standing alone, sounds shocking. But an honest look at the historical arc of white Christianity in America suggests that we should be astonished if it were otherwise. For centuries, through Colonial America and into the latter part of the 20th century, white Christians literally built — architecturally, culturally and theologically —  a version of Christianity that held an a priori commitment to white supremacy.

At key potential turning point moments — slavery, Reconstruction, Jim Crow laws, the civil rights movement and the policing and criminal justice crisis among African Americans — white Christians, for the most part, did not just fail to evict this sinister presence, they continued to aid and abet it. 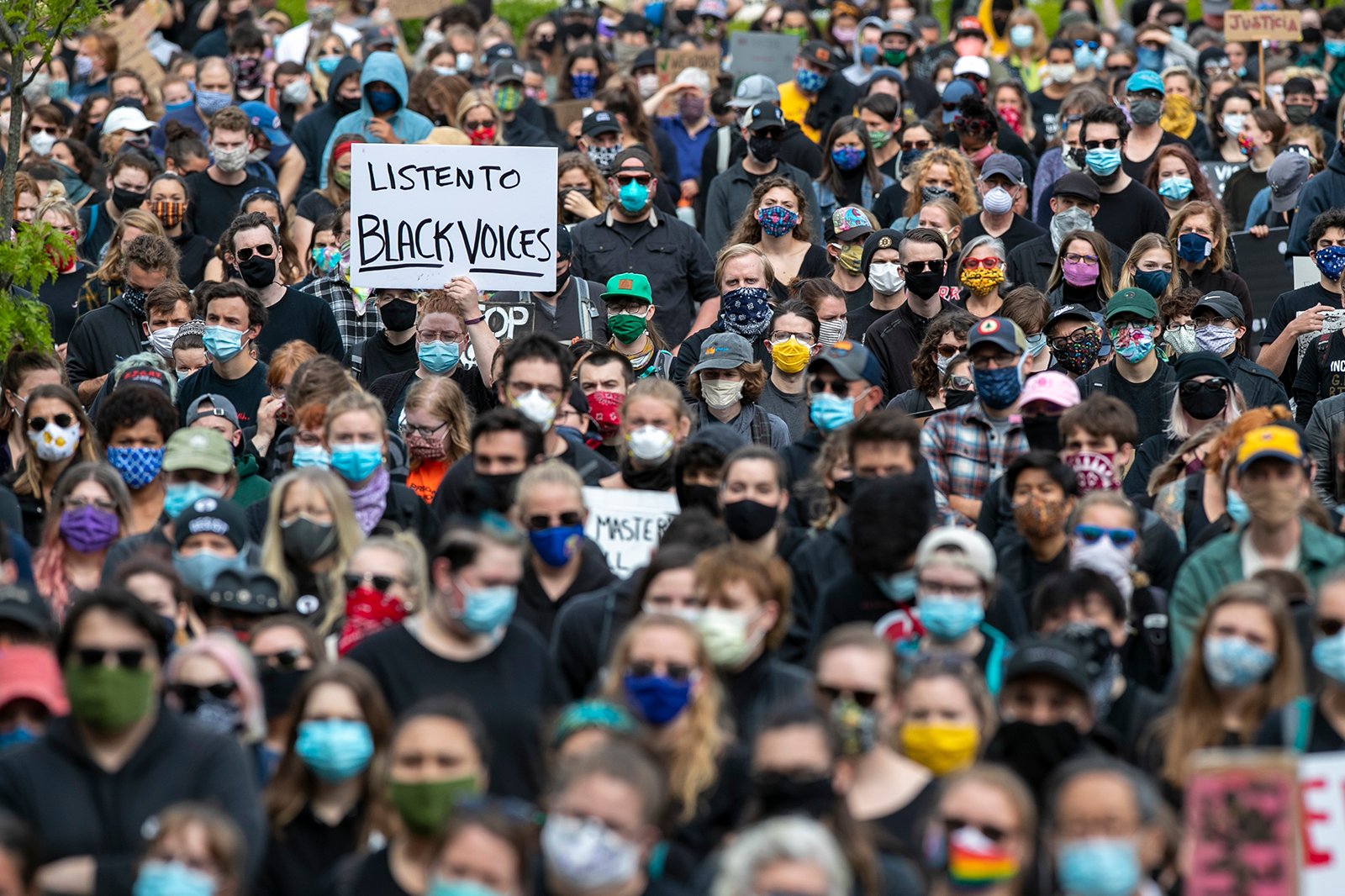 Demonstrators gather at a rally to peacefully protest and demand an end to institutional racism and police brutality on June 3, 2020, in Portland, Maine. (AP Photo/Robert F. Bukaty)

As the country is once again facing a reckoning on racial justice, perhaps the biggest obstacle to white Christians’ full participation in the movement for racial equality is an unshakable commitment to our own innocence. As I conducted the research for my new book, “White Too Long: The Legacy of White Supremacy in American Christianity,” I came to the conclusion that white Christians must find the courage to begin a long journey that starts with the simple act of telling the truth.

In religious terms, it means giving an unflinching testimony about ourselves, about our history and about how a commitment to white supremacy — both past and present, conscious and unconscious — has disfigured our faith.

This journey of confession and self-realization isn’t a simple one, but it begins with bearing witness to a more complete, and truer, story. Here’s what the beginning of mine looks like.

In my house I have a family Bible that belonged to my fifth great-grandfather on my mother’s side, printed in 1815. On the front inside cover it is inscribed, “Presented by Nathaniel Ellis to his friend Pleasant Moon, July 17th, 1825.”

Pleasant Moon was among the first generation of my mother’s family to be born in Georgia, where five generations of my family have lived in either Twiggs County or Bibb County. Pleasant’s father, William H. Moon, my sixth great-grandfather, had been born in 1740 in Albemarle County, Virginia, and served in the Revolutionary army. Sometime after 1790, he moved his family to the Georgia frontier, on land that was being seized by the Georgia government from its Indigenous inhabitants, the Creek and Cherokee Indians, and distributed via rolling lotteries to white settlers.

Although I have not been able to locate a will for my fifth great-grandfather, I’ve been able to locate one for his father’s brother and namesake, Pleasant Moon Sr. At his death in 1818, the county recorded both his will and an “Inventory of the Goods and Chattles [sic] of Pleasant Moon, Deceased.” The inventory was thorough, including items like “1 young bay mare @ $60;” “1 feather bed and furniture @ $90;” and “1 shot gun @ $11.” Not counting the land, my sixth great-uncle’s estate was fairly modest, totaling $2,293.22, or approximately $46,000 in 2019 dollars.

In other words, even among my barely-above-subsistence-farming ancestors, their way of life and economic well-being were thoroughly dependent on owning slaves.