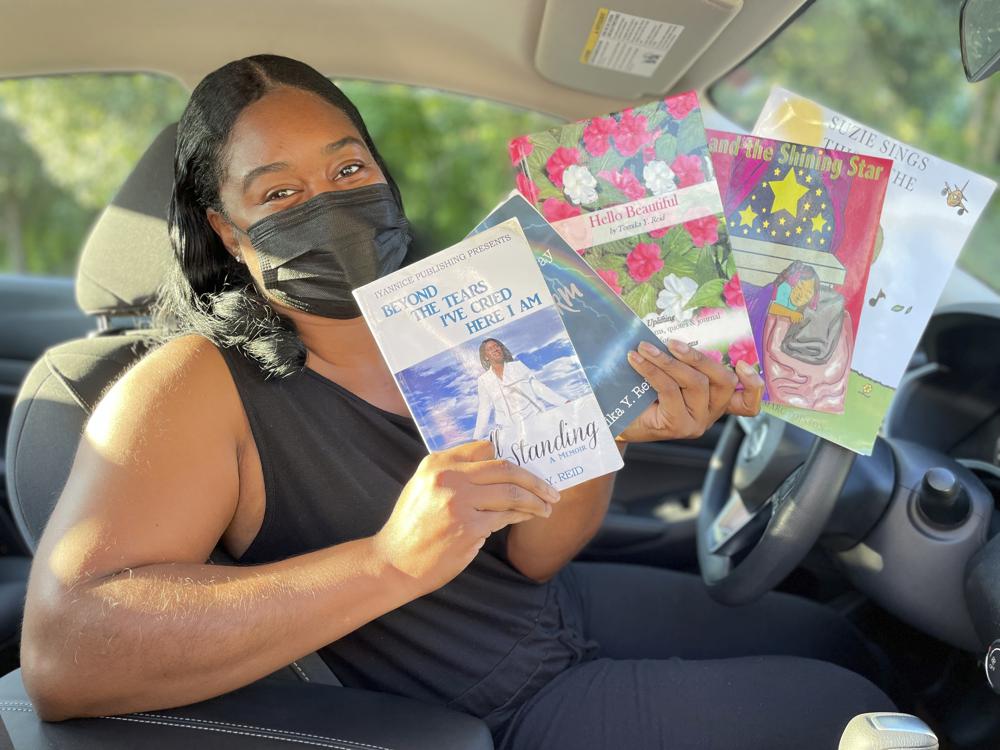 In this Wednesday, Aug. 10, 2022, photo in Princeton, N.J., Tomika Reid holds books that she’s authored. Reid, a single mother and children’s book author in the Princeton area, works as a ride-hailing service driver and tries to inspire passengers through spiritual guidance on the road as part of what she sees as a ride-hailing ministry. (AP Photo/Luis Andres Henao)

NEW YORK (AP) — One is an ordained pastor in Brooklyn, the other a single mother and children’s book author in New Jersey. Both drive for Lyft. Both share the word of God as roving preachers.

Pastor Kenneth Drayton and Tomika Reid try to inspire passengers through spiritual guidance on the road as part of what they see as mobile Christian ministries.

“You don’t always have to go to a church or sanctuary to experience the restoration and the power of God,” said Drayton, 61, a minister who also preaches at Mantels of Promise Ministries in Brooklyn.

He began to drive for Uber in 2015 after retiring from a career in the insurance industry. Listening to passengers who shared their stories on the road, he understood that his car could become an extension of the church.

“The car is such an ideal place to do this because it’s personal,” said Drayton, who now drives for Lyft. “I can share my faith and it’s so important because that’s what I live for.”

On a recent day, he began by praying in his impeccably clean 2017 Toyota Camry, and reciting Psalm 23 (“The Lord is my shepherd; I shall not want…”). On a break from driving in Manhattan, he reflected on how he reaches out to passengers.

He always plays classical music on his car stereo (his favorite is Mozart) to encourage a calm, pleasant mood. He begins with a greeting and a kind word. His priority, he says, is to introduce passengers to Christ, but he’s respectful if they’re not receptive. They’re often Christian, but he has also spoken to atheists, Buddhists, Hindus, Jews and Muslims. Instead of trying to preach, he says he focuses his message on the love of God and tends to avoid doctrine.

“That’s been the conflict, the repellent for healing and transformation,” said Drayton. “It’s discussion and debates that have caused holy wars.”

Reid also stays away from doctrine and focuses more on sharing her personal story, hoping it can help others deal with their challenges. Like Drayton, she feels that the church goes beyond the brick and mortar.

“This is something that God put me in a position to do,” she said. “And I love it because I just love inspiring people and encouraging them to never give up.”

Losses have marked her life, including the death of her mother, sister and the fathers of her two daughters. She often retells her story to passengers.

“I wanted to give up, but because of my faith in God, I’m still here standing” said the 40-year-old single mother. “And I just want to use my story to encourage others never to give up, no matter what you go through.”

In 2017, she began driving for Lyft to support her daughters, who are now 14 and 20. In the backseat pocket of her 2019 Nissan Altima, she keeps the five books that she has written, including one for children on how to cope with the loss of a loved one.

Passengers often buy her books or tip her generously and she proudly keeps a five-out-of-five-star rating. She usually plays George Michael on weekdays and gospel music on Sundays when she’s working and can’t make it to church.

“When I hear people say, ‘You made my day,’ I know I can make an impact on people’s life,” Reid said. “It brings joy to me. It’s like I’ve turned my pain into a purpose to inspire others.”

Evangelism experts say ride-hailing can be conducive to talking about faith. Lyft’s guidelines do not expressly prohibit evangelism nor conversations about religion, but they do promote inclusion and forbid discrimination, including on race, gender, and religious grounds.

“It doesn’t come as a great surprise to me because thinking about Christianity, there’s a long tradition of using technology to spread the word of God,” said Robert Geraci, professor of religious studies at Manhattan College.

He cited examples, including how — shortly after space flight became possible — there were people talking about how to use satellites to spread the Gospel and how preachers have used TV for decades.

“Uber, Lyft becomes a mode of religious communication and not just a transportation strategy,” he said. “It’s also a religious strategy.”

People in customer-facing professions, such as driving for ride-hailing apps, often strike up conversations about life and its challenges, said Ed Stetzer, executive director of the Wheaton College Billy Graham Center.

“In a world where interpersonal interaction is less common— our bank tellers are now all ATMs— faith sharing is less common. So people are finding creative ways,” said Stetzer, who is also dean of the school of Mission, Ministry, and Leadership.

“That’s what Christians have done for centuries, long before ride-share apps.”

Associated Press religion coverage receives support through the AP’s collaboration with The Conversation US, with funding from Lilly Endowment Inc. The AP is solely responsible for this content.

★
★
★
★
★
Votes: 0
E-mail me when people leave their comments –
Follow
Posted by Prince Malachi The First