Who Was The First Black Child To Go To An Integrated School? 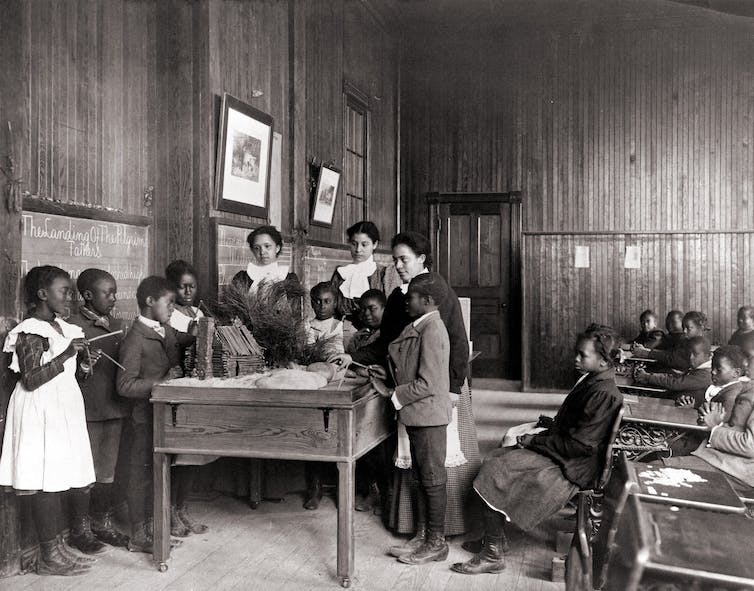 School segregation was the law of the land in the U.S. during much of the 19th and 20th centuries.
Everett Historical/Shutterstock.com

Who was the first black child to go to an integrated school? – Makena T., age 12, Washington, D.C.

When people think about the time when black people first began to integrate America’s public schools, often they think back to the 1960s.

In April of 1868, three years after the end of the Civil War, Susan Clark – a 12-year-old girl from Muscatine, Iowa – became the first black child to attend an integrated school because of a court....

The Supreme Court of Iowa issued that court order when it made its historic ruling in a school desegregation case brought by Susan’s father, Alexander Clark. This was 86 years before the U.S. Supreme Court issued the landmark Brown v. Board of Education decision, which ordered the desegregation of the nation’s public schools.

In the Iowa case, a judge named Chester Cole ruled that the Muscatine School Board’s racial segregation policy was illegal. The Iowa Supreme Court was the first court in the nation to say that segregation was unlawful.

Susan Clark’s parents were Alexander Clark and Catherine Griffin Clark. Alexander’s father, John – this would be Susan’s grandfather – was born to a slave owner and an enslaved woman. Both John and his mother were freed after John’s birth. Alexander’s mother, Rebecca Darnes, was the daughter of emancipated slaves, George and Leticie Darnes. Alexander was born free in Pennsylvania in 1826. Catherine Griffin was born a slave in Virginia in 1829, and was freed at the age of three and taken to Ohio.

Alexander and Catherine married in 1848, and set up their home in Muscatine, a small, prosperous town on the Mississippi River. Alexander was a barber and a successful businessman. He was an outstanding speaker and was so active in the Underground Railroad – a secret network that helped slaves escape to freedom – and other civil rights causes that he has been recognized as “one of the greatest civil rights leaders of the 19th century.”

The Muscatine School Board didn’t try to hide the reason it rejected Susan’s application to attend Grammar School No. 2, which was the school closest to where she lived. The school said its decision to keep black and white students segregated was in line with “public sentiment that is opposed to the intermingling of white and colored children in the same schools.” The school board argued that its schools were “separate but equal.” This argument worked in a lot of other courts at the time, including the highest courts in Massachusetts, New York and California. But the argument didn’t work in the Supreme Court of Iowa.

Justice Cole pointed out that the very first words in the Iowa Constitution say “equal rights to all.”

Susan Clark didn’t experience threats and taunts like black children did when they integrated schools in the 1960s. There were only 35 black children in Muscatine at the time.

Susan Clark went on to become the first black graduate of a public school in Iowa – Muscatine High School – in 1871 and served as commencement speaker.

The Muscatine Journal praised Susan’s commencement address, “Nothing But Leaves,” for its “originality,” observing it was “unpretending in style” and had “many excellent thoughts.”

Susan married the Rev. Richard Holley, an African Methodist Episcopalian minister, and their ministry took them to Cedar Rapids and Davenport, Iowa, and Champaign, Illinois. Susan lived a long life, passing in 1925 at age 70, and was buried in Muscatine’s Greenwood Cemetery.

The post Who was the first black child to go to an integrated school? appeared first on Urban Faith.