Sonshine is the Akron born rapper’s fourth album and is right on par with KB’s instant classic, Today We Rebel. Swoope address some tough societal issues, issues often times avoided by Christian artists espcecially when it comes to race and the Black Lives Matter movement. In an interview with Kick The Concrete, Swoope goes into the meaning of the album.

Sonshine is multi-faceted, I almost tried to fit a double entendre into one word. So it’s Sonshine with an O, not a U. The primary meaning is that the Son of God is shining on me and there’s a plethora of songs that refer to that, and not shining in the happy-go-lucky way, but moreso there is an ever-present covering and contentment that I had to find myself was only in Jesus.

Track 6, TSNK addresses the shootings that have occurred with the police and African American victims. He raps, Shot at the stop or found dead in your cell, That’s about as bland as it got for Sandra, Make them casket plans when cops say “hands up”, We got our hands up, don’t shoot
They say “put them cams up don’t shoot” (yah yah). Many fans may be offended by lyrics such as these. Some say it’s better to remain silent and not speak out on issues such as these, but how could Christians turn a blind eye to their fellow neighbor? Read through the Gospels and you’ll see a deep concern for Jesus as it relates to people of all walks of life. Regardless of class, race or gender, Jesus loved everyone and He challenged us to love each other as you love yourself.

Track 8, Black Boy continues to explore Black identity, but this time how it relates to God. It begins by saying, But you are more than a descendant of a slave. In many black families, this conversation is a must have between parents and sons, especially in light of recent events. The song then asks the question, Uh, black boy, black boy, did you know that the world is yours? Take off your natural eyes and put on your spiritual ones, this question isn’t a nod to the film Scarface or Nas’ famous song with Lauryn Hill, If I Ruled The World, it takes on deep spiritual meaning. Swoope answers the question in the same verse:

Your Father built it, presented it to you without a blemish
Your Father’s gifted, your Father’s gift is a sinless existence
No cause for tears when your eye lid is dripping
Wild up with liquid as your soul cries, water falls from those eyes
Cheek rivers roll by, dropping to the concrete, making a rose rise
Black boy, black boy, did you know that the world is yours?
Your Father built it, and he made it with His hands alone
And then He left you with Emmanuel
How to produce fruit

Behind Sonshine’s deep meanings, there’s a masterpiece of production. The album was produced by Kevmo, Natalie Lauren, Swoope and theBeatbreaker. Track 3, Never Left was a signal that the listener will be taken through a musical artistic masterpiece. I’m back like I never left, blessed what you call that, I ain’t came up, God came through, all facts, Errybody got a story, mine ain’t funny
Errybody got a price, mine ain’t money. Swoope doesn’t stop there, but goes on to rap, I’m an Anomaly, Check the gold plaque, ‘Crae, tell ’em we still follow Jesus, They can hold that, I’m back like a chiropractor off of vacation, Couldn’t come home ’til I covered all my bases, It’s it’s least I could do, like I’m working out of Avis, Eyes on Zion, unplug from the Matrix, Now I’m back.

It's no surprise Jackie Hill Perry's latest album, Crescendo, speaks volumes about the Christian life. Her songs tackle important issues within the church, firing off passionate, fast-paced verses one minute and pausing for introspection the next. Crescendo's relentless and unrestrained honesty and passion make this collection a necessity for listeners.

"Lamentations" kicks off the album with a reflective track. Jackie all but immediately launches into lyrics as low, steady, bass-emphasized beats lay the foundation for the song. This is no gentle stroll down memory lane - this is a fast-paced, merciless self-review where Jackie details her struggles. Every crescendo starts off low and the song only amplifies this theme. "I'm scared of me, God - terror defined," Jackie fires away, "I need the Shepard, the staff, the valley, the shadow to pass me."

"Fall Away" still brings the listeners to a low point, describing a plea for someone to return to Christ. Keyboard notes blend behind a slow yet active beat, creating a sound that's sorrowful yet hopeful. Jackie's words accelerate across the lyrics, with a passionate, pleading chorus to sandwich the struggles with a cry for redemption - "Lights faded out and it’s dark, but never too far from Him, come back to your first love," the chorus cries.

The crescendo reaches its peak with the title track, trying together the collection with a testimony that ends on a high note. A steady beat is immediately outpaced by Jackie's fast-paced lyrics, throwing the emphasis on the story that she tells. It's a testimony of two people - a man and a woman - going back and forth in both good and bad times. The thread that ties it all together, though, is the work of God - work so evident that it speaks volumes in their lives. This is the peak of the crescendo, the point where God speaks most loudly through one's life. It's all capped off with "Reprise," a worshipful note that ends the album with a beloved hymn.

There's a song in Crescendo for every moment in life - the lows and highs of a walk with God. Honesty and sincerity saturate every track, whether it's filled with bold fire or transparent reflection. Jackie Hill Perry launches into each song with impressive passion and effortlessly connects with listeners through each song. Without a doubt, Crescendo is worth repeated listening. Read More Here 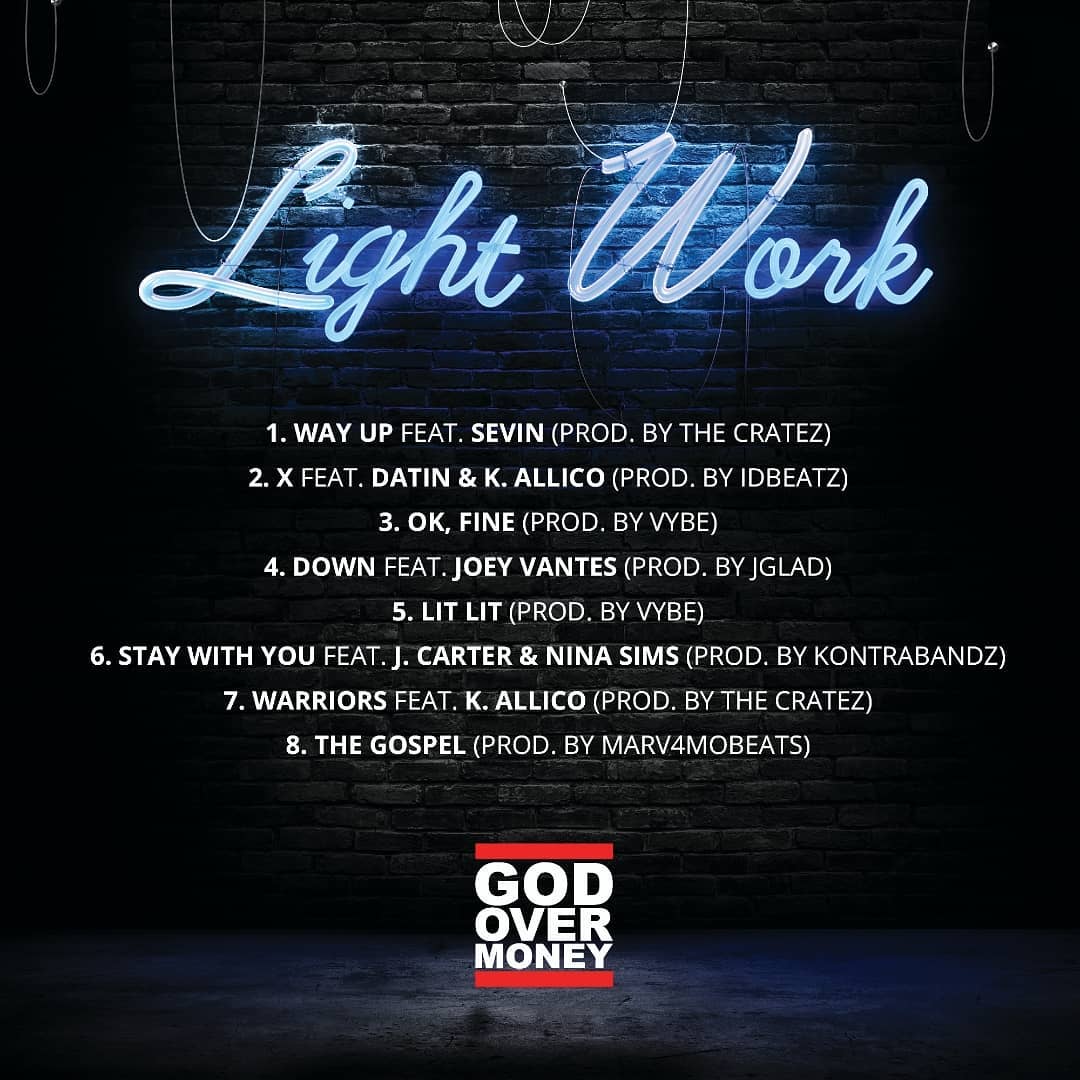 The Light Work EP from God Over Money (GOM) front man ‘Bizzle’ is an  8-track EP features  his label mates Datin, Sevin, K. Allico and a host of others. Read More Here