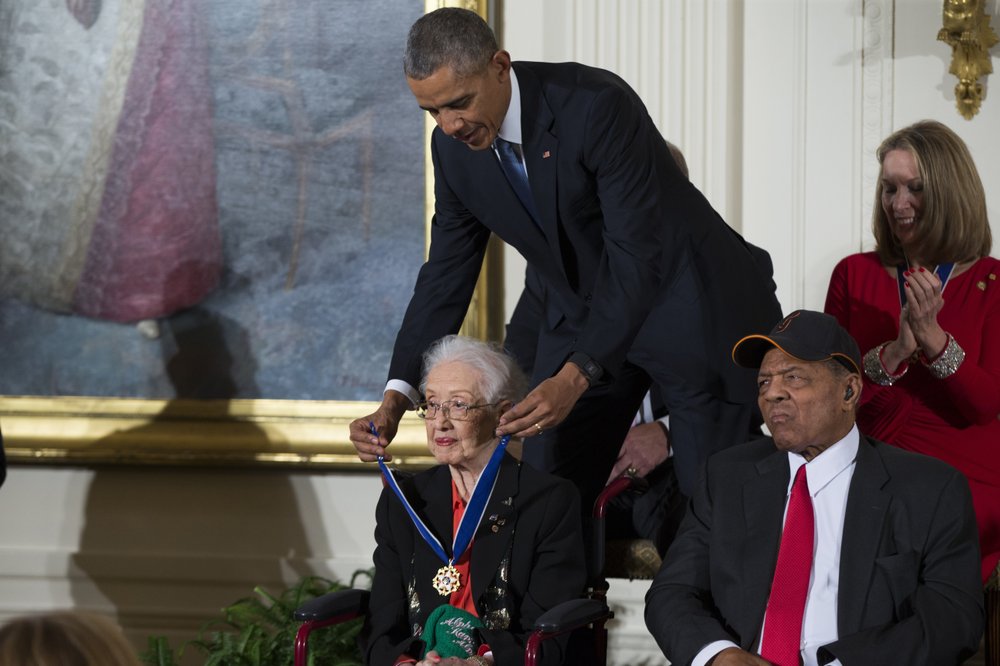 FILE – In this Nov. 24, 2015 photo, Willie Mays, right, looks on as President Barack Obama presents the Presidential Medal of Freedom to NASA mathematician Katherine Johnson during a ceremony in the East Room of the White House, in Washington. Johnson, a mathematician on early space missions who was portrayed in film “Hidden Figures,” about pioneering black female aerospace workers, died Monday, Feb. 24, 2020. (AP Photo/Evan Vucci, File)

Katherine Johnson, a mathematician who calculated rocket trajectories and earth orbits for NASA’s early space missions and was later portrayed in the 2016 hit film “Hidden Figures,” about pioneering black female aerospace workers, has died. She was 101.

NASA Administrator Jim Bridenstine said in a statement that Johnson “helped our nation enlarge the frontiers of space even as she made huge strides that also opened doors for women and people of color.”

Johnson was one of the “computers” who solved equations by hand during NASA’s early years and those of its precursor organization, the National Advisory Committee for Aeronautics.

Johnson and other black women initially worked in a racially segregated computing unit in Hampton, Virginia, that wasn’t officially dissolved until NACA became NASA in 1958. Signs had dictated which bathrooms the women could use.

Johnson focused on airplanes and other research at first. But her work at NASA’s Langley Research Center eventually shifted to Project Mercury, the nation’s first human space program.

“Our office computed all the (rocket) trajectories,” Johnson told The Virginian-Pilot newspaper in 2012. “You tell me when and where you want it to come down, and I will tell you where and when and how to launch it.”

In 1961, Johnson did trajectory analysis for Alan Shepard’s Freedom 7 Mission, the first to carry an American into space. The next year, she manually verified the calculations of a nascent NASA computer, an IBM 7090, which plotted John Glenn’s orbits around the planet.

“Get the girl to check the numbers,” a computer-skeptical Glenn had insisted in the days before the launch.

“Katherine organized herself immediately at her desk, growing phone-book-thick stacks of data sheets a number at a time, blocking out everything except the labyrinth of trajectory equations,” Margot Lee Shetterly wrote in her 2016 book “Hidden Figures,” on which the film is based.

“It took a day and a half of watching the tiny digits pile up: eye-numbing, disorienting work,” Shetterly wrote.

Shetterly told the AP that Johnson was “exceptional in every way.”

“The wonderful gift that Katherine Johnson gave us is that her story shined a light on the stories of so many other people,” Shetterly said Monday. “She gave us a new way to look at black history, women’s history and American history.”

Johnson considered her work on the Apollo moon missions to be her greatest contribution to space exploration. Her calculations helped the lunar lander rendezvous with the orbiting command service module. She also worked on the Space Shuttle program before retiring in 1986.

Johnson and her co-workers had been relatively unsung heroes of America’s Space Race. But in 2015, President Barack Obama awarded Johnson — then 97 — the Presidential Medal of Freedom, the nation’s highest civilian honor.

The “Hidden Figures” book and film followed, telling the stories of Johnson, Dorothy Vaughan and Mary Jackson, among others. Johnson was portrayed in the film by actress Taraji P. Henson. The film was nominated for a Best Picture Oscar and grossed more than $200 million worldwide.

In 2017, Johnson was brought on stage at the Academy Awards ceremony to thunderous applause. Jackson and Vaughan had died in 2005 and 2008 respectively.

Johnson was born Katherine Coleman on August 26, 1918, in White Sulphur Springs, West Virginia, near the Virginia border. The small town had no schools for blacks beyond the eighth grade, she told The Richmond Times-Dispatch in 1997. 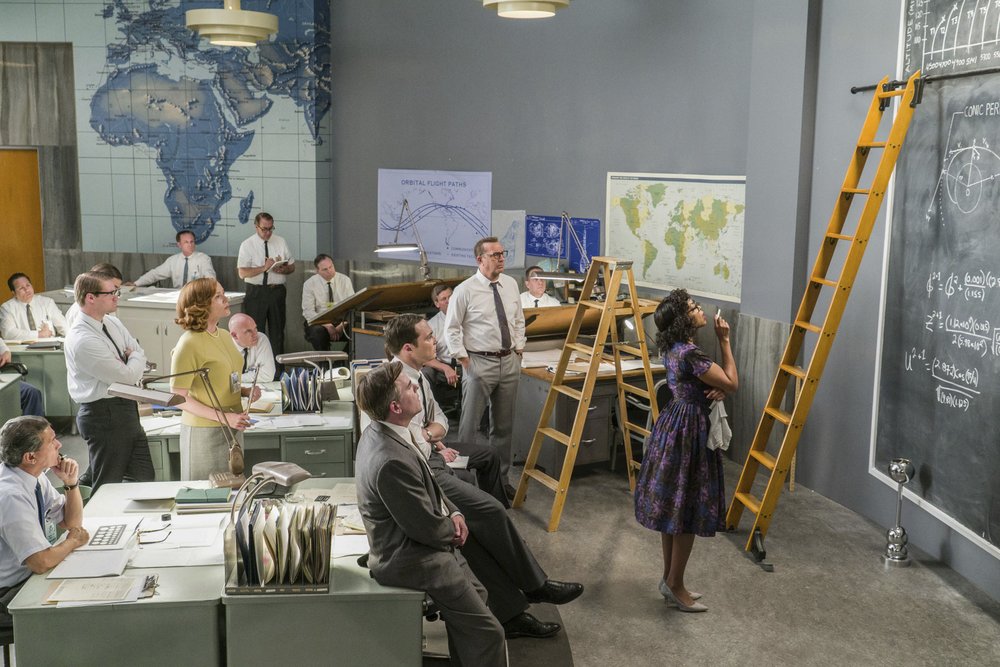 Each September, her father drove Johnson and her siblings to Institute, West Virginia, for high school and college on the campus of the historically black West Virginia State College.

Johnson taught at black public schools before becoming one of three black students to integrate West Virginia’s graduate schools in 1939.

She left after the first session to start a family with her first husband, James Goble, and returned to teaching when her three daughters grew older. In 1953, she started working at the all-black West Area Computing unit at what was then called Langley Memorial Aeronautical Laboratory in Hampton.

Johnson is survived by two of her three daughters, six grandchildren and 11 great-grandchildren, said Reavis, the family attorney.

“Just last week, she was giving an interview to a high schooler who wanted to talk to her in French,” Reavis said. “She had two degrees. One in French, and one in Mathematics.”

Looking back, Johnson said she had little time to worry about being treated unequally.

Saif Uddin is now a member of The Oracle
yesterday
Welcome Them!

Prince Malachi The First's 3 blog posts were featured
May 26