Do You Agree? Majority of Americans Still say Religion Holds the Answer to the Country’s Problems 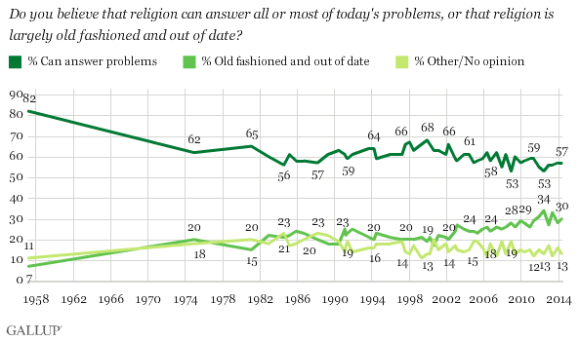 The latest update on this long-term Gallup trend comes from Gallup’s May 8-11 Values and Beliefs survey. Gallup asked this question once in the 1950s, once in the 1970s, and multiple times in the 1980s and each subsequent decade.

The 82% choosing the “can answer today’s problems” options in 1957 is in line with a number of other measures from that decade showing a high level of religiosity, including religious service attendance, importance of religion, and the percentage of Americans with a formal religious identity.

So far this decade, an average of 57% of Americans have held this view, representing a small but notable decline. 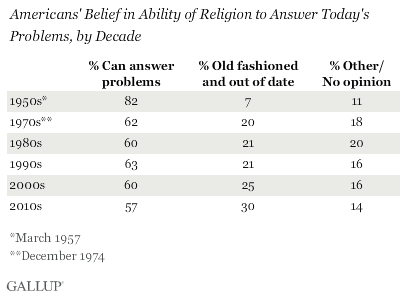 Americans also appear to have a somewhat higher degree of certainty about their views on religion now than in the past, with the percentage not choosing “can answer today’s problems” or “old fashioned” dropping in recent years compared with previous decades. Additionally, because the 2014 data match the overall average for the current decade, it is possible that the trend toward the belief that religion is out of date may be abating.