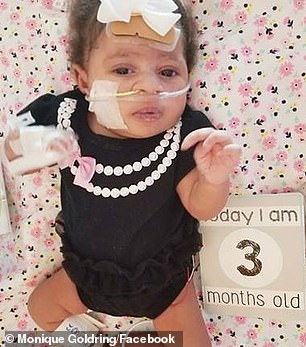 Phoenix Da’Vine (left and right), 11 months, from Temple Hills, Maryland, is being hailed a ‘miracle’ for celebrating her first birthday in two weeks after being taken off of life support four months ago

A baby girl born with a serious heart condition, who was deemed a ‘miracle’ for surviving after she was taken off life support, is about to celebrate her first birthday.

Phoenix Da’Vine, from Temple Hills, Maryland, was diagnosed at birth with a double outlet right ventricle, a heart defect that makes it difficult for blood to throw through the body properly.

After undergoing two surgeries, she went into cardiac arrest when she was just seven months old and had to be placed placed on life support.

Fearing that Da’Vine would spend the rest of her life in hospice care, her mother, Monique Goldring, made the heartbreaking decision to take her daughter off of life support in April 2019.

Phoenix is currently at home and – although she’s on oxygen and taking a slew of medications – she will turn one year old in less than two weeks.

Goldring gave birth to Phoenix via C-section on August 25, 2018, after developing pre-eclampsia, a pregnancy complication characterized by high blood pressure.

‘I had migraines for like a week straight and my mother was like: “You’re going to the doctor”,’ she told DailyMail.com.

‘They found out I had pre-eclampsia – and I had a clean bill of health my entire pregnancy – so they decided to do a C-section then.’

Phoenix was born full-term, weighing seven pounds and two ounces. While Goldring was in recovery, the nurses performed a routine check-up pm the newborn.

They found her oxygen saturation levels were extremely low and detected a heart murmur, so she was admitted into the neonatal intensive care unit.

Phoenix underwent an echocardiogram shortly after and was diagnosed with a congenital heart condition called double outlet right ventricle (DORV).

But, in DORV, the heart’s two major arteries both connect to the right ventricle, neither to the left ventricle, according to Boston Children’s Hospital.

This creates a problem because the right ventricle then mixes oxygen-rich and oxygen-poor blood before leaving the heart, which circulates throughout the body.

About one in every 10,000 babies is born with DORV, according to Seattle Children’s Hospital.

‘I was devastated and I was told that to survive she would need to have four open-heart surgeries,’ Goldring said.

‘But I knew she needed them to live.’

Phoenix had her first surgery in September 2018, when she was just 10 days old, during which a pulmonary arterial band – a sort of medical patch – inserted to limit the amount of blood flowing to her lungs.

But too much blood was still seeping through to her lungs, so she underwent her second of four-needed surgeries and had a shunt inserted in October 2018 at two months old.

She was hospitalized until January 2019 and all seemed well until March, when Goldring noticed a lot of congestion in her daughter’s nose.

It was the first subtle sign of the turn for the worse Phoenix was about to suddenly take.

One day, when Phoenix’s nose started bleeding a lot, Goldring drove her from her home in Temple Hill to Inova Fairfax Hospital in Annandale, Virginia, where Phoenix regularly received care.

‘Halfway there she was cranky and very fussy but eventually, she got quiet,’ Goldring said.

‘She looked like she was asleep. But we get to the ER and she was completely blue. I shook her arm and face, she did nothing. I screamed her name, nothing.

‘I pulled out the car seat and rushed her into the ER and said: “My daughter’s not breathing!” They rushed her in and it felt like forever.’

After finally detecting a pulse, doctors told Goldring that Phoenix had suffered severe brain damage due to a lack of oxygen flowing to her brain and she was placed on life support for about a month.

‘I prayed with my family and my friends…and one day I said: “Phoenix, if you’re tired, let me know”,’ Goldring said.

‘Phoenix was facing towards the TV, and she looked at me when I said that. That was confirmation for me.’

Phoenix was taken off of life support on April 23 and was only expected to survive for six hours.

But after the six-hour mark, she was still alive.

After two months, she was discharged and will celebrate her first birthday in less than two weeks.

‘We are definitely having a big party with family and friends and RSVPs are already at 100,’ Goldring said.

‘We’re going to have carnival games and have piñatas and face painting and lots of food.’

Currently, Phoenix is on oxygen 24/7, she’s fed with a feeding tube and takes 14 different medications.

This includes her standard heart medication, Zantac to help settle formula in her stomach, Valium and morphine for pain and anti-seizure medication.

Phoenix still needs two surgeries, called a Glenn procedure and a Fontan procedure, to redirect the flow of blood because she will eventually outgrow her shunt.

Inova Fairfax and Children’s National have both denied the procedure, saying the risks outweigh the benefits, so Goldring is looking at different hospital.

The family has started a GoFundMe page to help cover the cost of Phoenix’s medical bills. As of Wednesday evening, more than $7,400 has been raised out of a $100,000 goal.